Only a few more "wee folk" , some more English archers and welsh spearmen and then a bit of scenery to do!
Posted by Paul´s Bods at 05:23 22 comments: 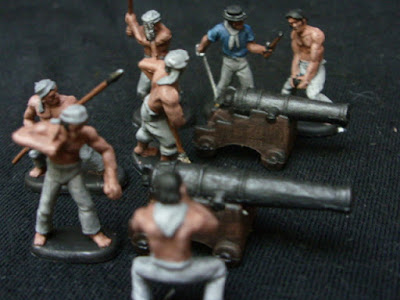 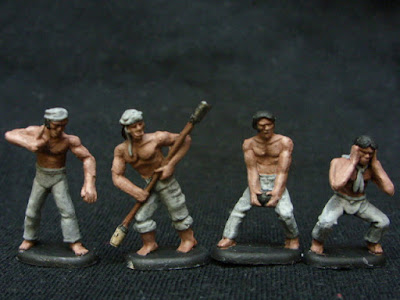 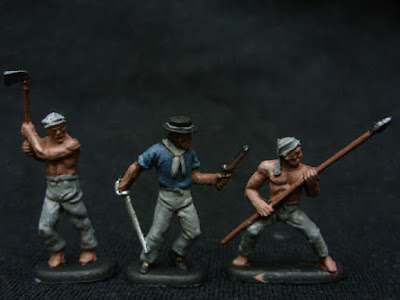 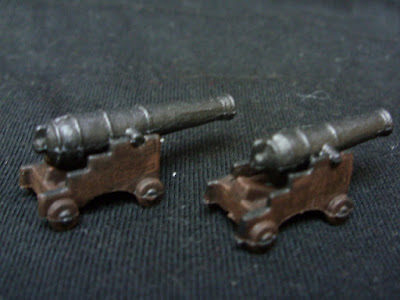 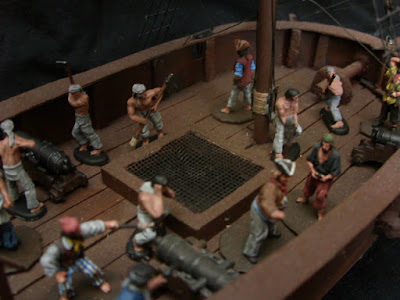 The one complaint about this set...only one female. Hopefully there will be a couple more in the next set. There´s a bit of Flash and a couple of the bods have some mold lines which need removing but it´s not a lot and easily dealt with.
All 13 poses together..14 bods in total with the double pose. The pair in the middle is very reminiscent of the pose in the Scottish Army of Wallace set. The bod on the left is collecting stones for ammo but the bod on the right has done the sensible thing. Why get arm ache throwing hand sized Stones when a pebble will do? There´s a lot of bods with Gladiator style equipment, just under a third of them have some sort of Gladiator kit. As a rag-tag army,  a lot of them would have whatever weaponary and armour they could lay thier Hands on and Gladiator Equipment would have been pretty uncommon. Still, as far as I´m concerned it´s fine. The shields are a bit "odd" Why the square one? Did Gladiators at the time have square ones (73 B.C) or did they have them later on to reflect the roman Equipment of the time? One thing not Mentioned on PSR, the bod in the middle, Spartacus himself ? As far as the pose and clobber goes,  he looks very similar to the Kirk Douglas Version. And of course, the inevitable end of the Spartacus revolt.
There´s a couple of small Problems with the crucified bod.

1. The pegs to hold him on are way to big for the holes so it´s best to cut them off and glue him.

2. The ropes which would have been used to  hold him up are missing. Imagine what would happen if a Person was nailed up like that. The weight of his unsupported body  would simply rip the nails out of his Hands. Also..did they actually put the nails through the Hands? Apparently not, it was through the wrists. The nails were inserted just above the wrist, between the two bones of the forearm or driven through the wrist, in a space between four carpal bones. Apparently there have been experiments done (who did this or took part I can´t imagine) to prove that nailing through the Palms was possible but they were supported by ropes as well. ..
I don't visit or comment on your blogs half as much as I should like; and I visit less than half of  your blogs half as much as you deserve.
The reason..that 4 letter word, WORK. At the moment a lot of hours (averaging 60 a week) and a lot of travel to and from work (400 miles plus a week) Better than no work..the real world needs paying for and something has to give..and at the moment it´s the Hobby. Hopefully I´ll get a Routine set up and keep going but at the present time, and the work load looks to increase drastically, my productivity in the Hobby world is reduced to a slow burn :-(
Why don´t the maths ever add up?
No work..loads of time for painting..no Money to buy bods etc
Work...no time for Painting but money to buy bods!

Someone didn´t give way and tempers were raised, a knife drawn and blood spillt. Another set of medievals from the master sculptor Alex. The male could be rolling up his sleeves to prepare for fight but I went for him holding a cut. "what´s behind my back?" As always, the faces are really something. The List of participants present at the  Magna Carta sighning -   Barons, Bishops and Abbots,  continues with Stephen Langton, Archbishop of Canterbury,
One of his Brothers, Simon Langton, I´ve already painted up HERE.