Bit of a mixed titel but seeing as one of the guns seem to be fixed as if mounted permanently on a wall,  it sort of fits all the possible uses the set could be used for, both in defence or seige of a Castle or also, in the case of the handgonners, field warfare.
Made by Ultima Ratio, this is a very nice set. 4 sprues each with 6 bods, a pavise and stand alone Cannon. Flash is virtually non-existant. The Bod Holding the 4 barrelled Handgonne has a bit of excess plastic between his Body and the weapon´s handle but it doesn´t affect the Overall look.
Me, I give it 10/10,  simply for the Quality of the sculpts and the subject matter. 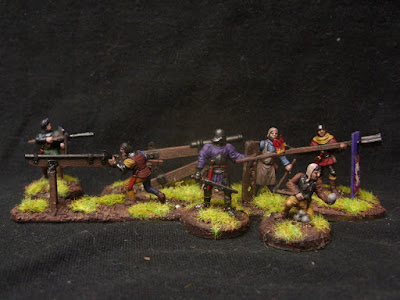 Handgonnes
The Pavise has the message "In Vino Veritas" (In Wine, Truth) on it and a priestly looking type praying to a wine goblet. I´ve done a bit of searching around but found no Pavise with the Slogan on it so maybe it´s an Joke on the part of the scupltor.
The gunner holds a flaming brand to ignite the gun. A slow match or a heated iron would be more accurate but the brand is ok.. 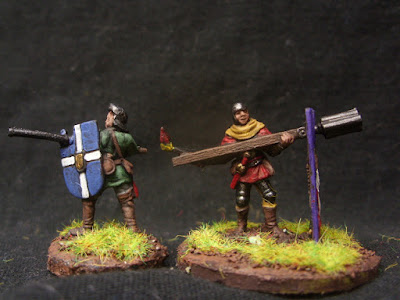 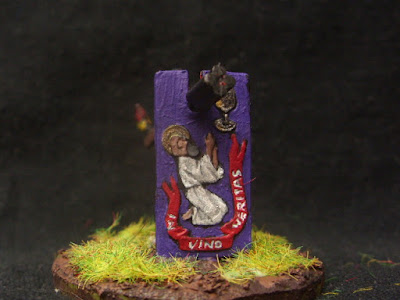 The Guns.
I´ve seen examples of them in print but I can´t remember where. They look  late medieval  or Renaissance.
Anyways..only one bod per gun? Surely the one with the enormous bipod gun wouldn´t be able to aim and fire the Thing?
OOB, the bipod is flat along the gun  so  it Needs warming up in hot water and twisting into a realistic Position..hardly any work at all.
The large gun on the stand would more than likely be a fixed weapon on a Castle wall but I´ve made it into a field weapon.
Again..the gunner has a brand 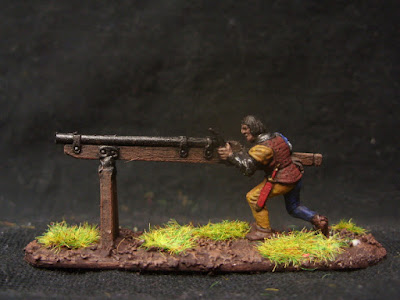 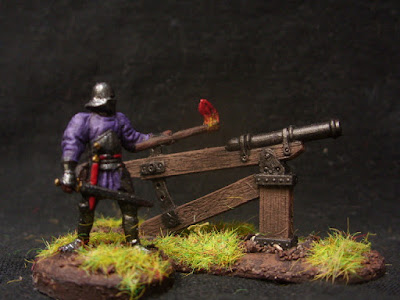 Cannon Ball Masons.
One is Holding a shot measuring board. The holes are numbered from top to bottom I-IV. Why four hole sizes? Possibly the availabe guns come in 4 calibres? Why he´s Holding an axe I´ve no idea.
The bod kneeling has a lot of chipping ahead of him if he wants the shot to fit even hole number IV. 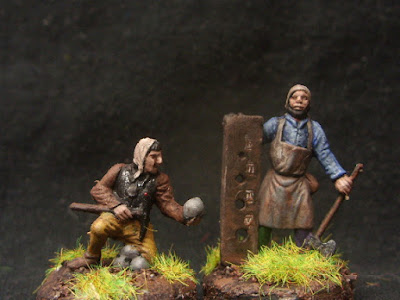