Produced in 1961 this set when compared with todays offerings these bods are left in the dark..but like all Airfix sets they hold a certain charm for me...remembering happy days...the carpet monster snatching my little friends away to who knows where..painting them with gloss Humbrol paints..treating them with no respect whatsoever...did they forgive me? Did they heck!!

10 years later, in 1971,  the cowboys recieved some friends to aid them with the never ending fight with the carpet monster.These are meant to be the main characters from the TV series, "The High Chapparral". (The bod third in from the left...no it isn´t the Mekons wife...it´s John Cannons wife!!!..poor bloke)
Posted by Paul´s Bods at 11:06 No comments:

Figure created by the genius hands of Alex (Valdemar Miniatures) for the Bennosfigures Forum Meeting, Kampen, 2010.
Posted by Paul´s Bods at 10:42 No comments:

The idea is a good one...original to say the least, except the figures need a lot of flash removing which in some cases takes nearly as long as painting the bods themselves.

The car used is a repainted 1982 Mattel Classic Packard. 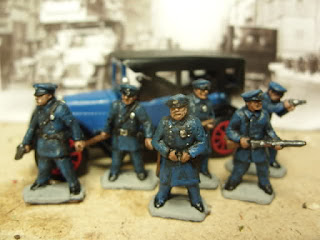 Bonnie and Clyde...well they aren´t actually labelled as such but ....why not?
The car is also from Mattel and repainted. 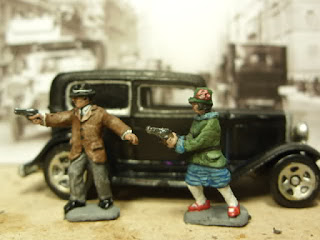