Full  (and correct) titel "Russian Peasant Levy in Winter Dress".
I´ve looked at them over at PSR a few times and dismissed them as ..well, being way too ugly and, what would I possibly do with Russian peasants?
Anyway, I decided, after seeing some conversion potential and that they could possibly be opposition for vikings, I got them.

Basic colour scheme, even thier shields I´ve painted as plain wood without any symbols on them.. 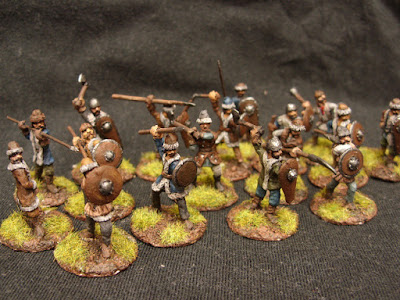 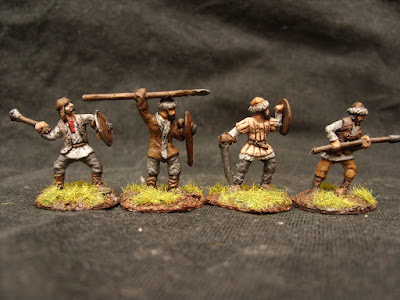 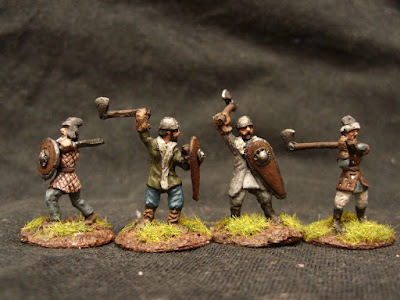 The Bod far right had his arm repositioned (hot water) and him and the one on the far right have had metal spears added. The one second from right has had a new javelin* added. 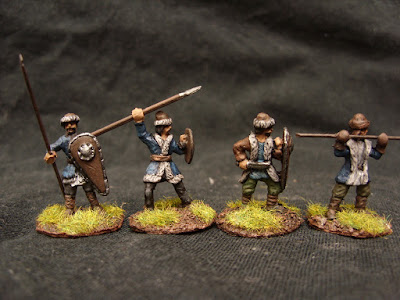 Conversions. New weapons, a couple of head swops and one has had a shield swop 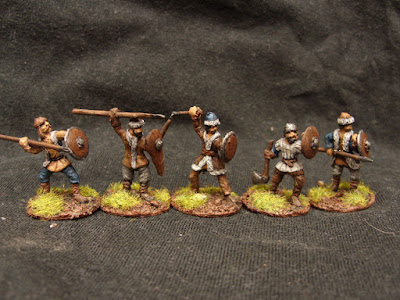 They´re a poorly armed bunch. Each one of them only has a single weapon, so the one lobbing a javelin*  has little hope after chucking it,  apart from;
1. Knock down one of the opposition with his javelin and pinch his weapon. Not that good a plan, as the opposing bod would more than likely be a distance away.
2. One of the opposition chucks a javelin. Hopefully, It doesn´t cause him or one of his mates  any damage and it´s not broken so he can re-use it. If one of his mates gets hit,  he would have to be close enough to be able to retrieve the javelin.
3. One of his mates gets knocked down making his weapon available. Again, his mate would need to be near him.

Edit;
Another conversion. Bow arm taken from Strelets Army of Henry V set (one kneeling, right side third row down from the top), mace removed, hand trimmed a bit and then squashed with pliers to make a fingers like imprint. Arrows from the Zvezda English Infantry of the 100yrs war.
Ok..he isn´t using a classic russian recurve bow but, hey- he´s a peasant. 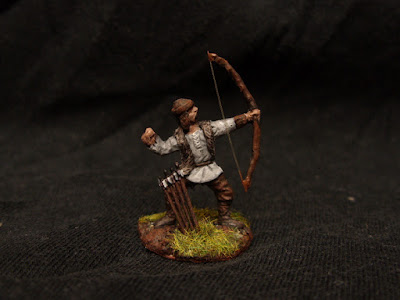