Do I need another Catapult? No I don´t  but this is for an upcoming Project so ..yes, I do need another one :-) 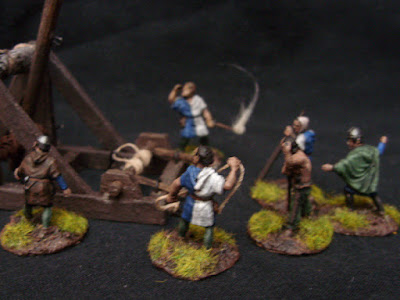 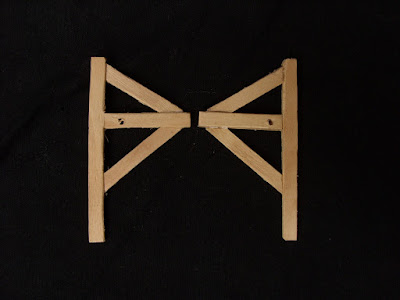 The connecting beams added.
Buffer for the throwing arm made from tissue paper rolled up and painted. Rolling gear added. The round pole was a Kebab stick with 4 holes drilled in it to take the winding Levers. 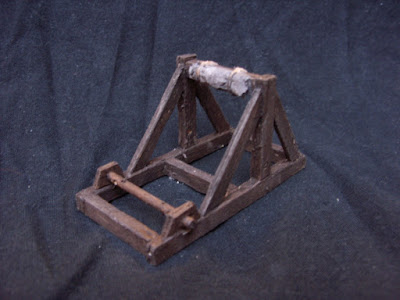 "Rope" added.
I came up on a Problem. It seems most catapults had a cogwheel added to one side of the rolling bar which had a drop latch, which as the Tension built up,   stopped any  loss of tension but I hadn´t any small enough cogwheels to create one so an alternative locking method had to be developed.
Basically, the winding gear  would be wound far enough that the two holes on the bar would be in line with the two hoops and then a pair of Levers would be pushed in to lock it. Seems reasonable if not a bit unlikely.
The two rings (sorry pic is a bit blurry) between the top hoops are for the trigger release. 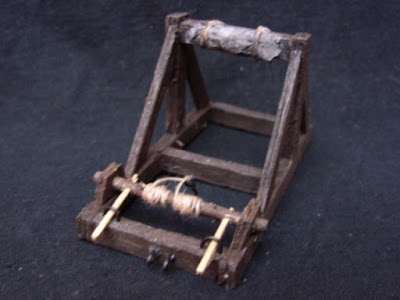 Throwing arm.
Carved and filed form a piece of Wood from an old fruit box 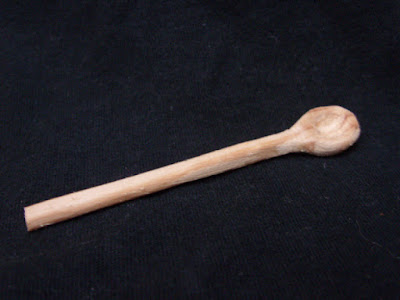 Throwing arm added.
Tension ropes made using copperwire. The top ring on the arm would, when the arm is pulled right back, locate between the two rings on the frame. A pin (with an eye on one end) would then be located along all three eyes to lock the arm allowing the hook, which is attached to the winding gear rope and the second ring on the throwing arm,  to be released. Pulling the pin out releases the arm.
I´ve also moved the two rings on the rear of the Frame as they didn´t line up with the ring on the arm.

At this point I realised...the "clever" solution to a lack of cogwheels to lock the rolling bar was a bit unecessary. Why? As there are 4 holes in the rolling bar it would mean two men could pull their Levers to the fullest extent, hold and then two more could add thier poles and take up the Tension allowing the first two to remove them and so on. When the locking pin was engaged the arm would stay in Position with or without a cogwheel.
Anyway, on the advice of the H&S officer, the "clever" locking idea was left as it was. 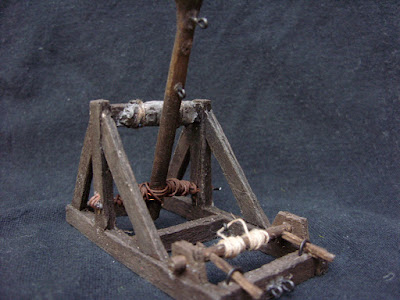 The Boss has had a head swop using the Archer´s head from the Airfix Romans set, cheek guards and neck guard removed. Left arm removed, Sword removed and arm turned around and re-attached.
Standard bearer from the Airfix Ancient Britons set.  Head swop from one of Robin´s bods and he´s become a Lever Operator along with his mate next to him who got a head swop and his Sword replaced with a Lever.
Then a generic "crew member number 6" (see the film Galaxy Quest)
The one holding the brand was holding a staff across his waist but after removing it, repositioning his head and giving him an arm from an archer,  he´s looking where the Munition will fall.

I might add another holding a hammer to help with the release pin. 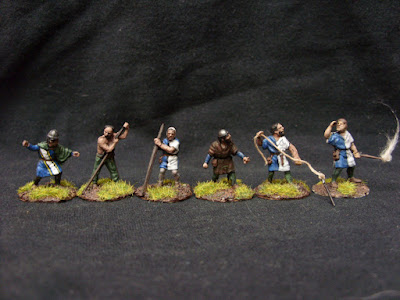