Foot command for the english infantry  for the Bannockburn Project.
The mounted bod is Humphrey de Bohun, 4th Earl of Hereford. As the constable of England, He was supposed to been in Charge of the army for the 1314 campaign but he´d fallen out of favour with Edward II so the Job was given to Gilbert de Claire, Earl of Glouchester.
Still, at Bannockburn, on day one,  he got to lead the Charge  in which his Cousin, Henry de Bohun,  famously got his head bashed in by Robert Bruce.
On day two, Gilbert de Claire was killed and Humphrey led a large Company of english/welsh Knights and archers. With the battle lost, he and others retreated but they ended up being taken prisoner, later to be ransomed.
8 years after Bannockburn,  Humphrey met a very sticky end at the Battle of Boroughbridge.

Anyways, as there´s no (or as far as I could find out) single Person named as an infantry commander* on the english side,  I´ve decided to give Humphrey the role.
The lions rampant on the nag´s caparison.  If closely inspected, are representitive, ie; they look the part from a distance. I really can´t paint one Lion rampant that small let alone 24! 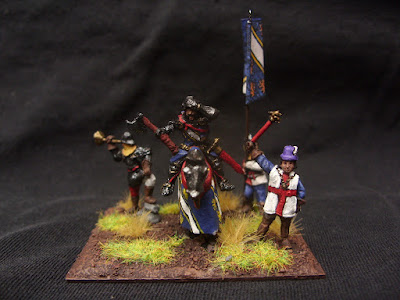 As Humphrey (in this role, day 2 ? ) is not charging into the fray,  his Standard bearer isn´t mounted. The bod who got the Job is a converted archer, who was in the process of stringing his bow,  from the Army of Henry V set. Bow and string removed, head re-positioned
The flag, of which there are a couple of variants about, comes from the Krigsspil site - English army at Crecy,  second battle - left wing,  number 2.
In that Version, the Cottises (the  lines to the left and right of the band in the middle) are in White. I painted them yellow. 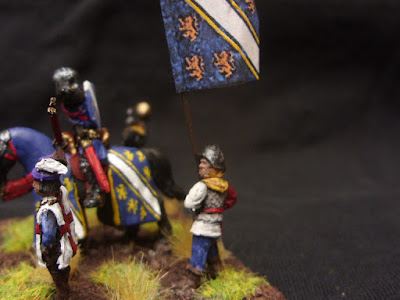 The bugler. Both top and bottom half are also from the Henry V set. 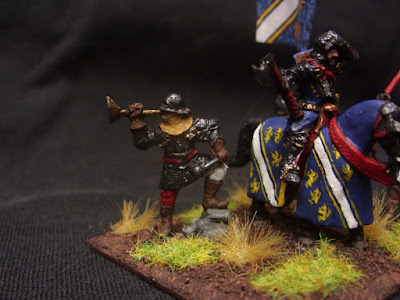 The Herald  is from the Army of Joan d´Arc set. I wouldn´t fancy his Job having to record all english losses over the two days. I´ve kept his Tabard design simple....the St George´s cross is much easier to paint than Edward II´s coat-of-arms.
Humphrey´s nag is either from the Medieval Britian or the Scottish army of Robert the Bruce set**.  Humphrey is from the English cav of Edward I set. The pose, him Holding his Hand up to his head,  looks less like he´s pushing his Visor up and more like he´s saying to himself,  "what the F... is Gilbert doing!!!?" 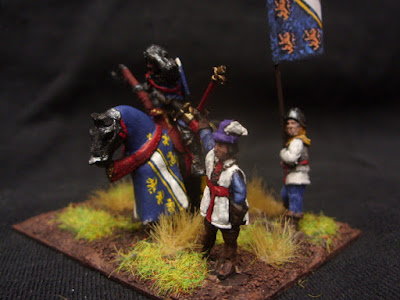 *Ok, Aymer de Valence is named as being in Charge of a large force of Welsh archers and spearmen and mainly in the context of leading them to safety after the battle but for the commanders of rest of the english foot,  there´s no-one named.
** It was in the spares box so could have come from either set.

Anyway, enough of the Bannockburn Project for a while...it´s back to the 1329 Teutonic order dio.

Witches...who wouldn´t want a set of Medieval witches?
Linear - A have a poll for Crowdfunding 7 new sets, including an 18+ set of witches. Why is the set 18+ ? TBH, at the Moment no-one knows.

The link for Voting, more than one choice is possible,  is HERE,  but TBH, I mean, witches..is there another choice from the list ? :-)...
Ok, the medieval ambassadors would be good as well.
Posted by Paul´s Bods at 04:53 16 comments: