I´ve already painted the HaT El Cid Heavy cavalry as Normans but now they are painted for their intended role. 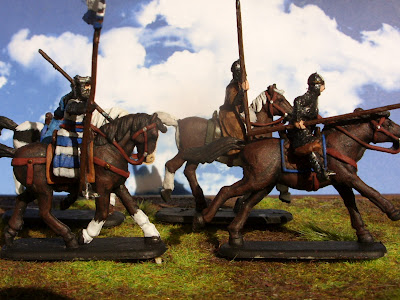 Recently, Peter from Peter´s Cave Blog painted up a set of the Strelets Medieval levy II  as Guildsmen  at the battle of the Golden Spurs (this site, De Liebaart,  is an excellent resource for the period., weapons, clothing, cooking and life in general )
Well, he can´t be allowed to get away with it, So this is my "answer" , Pieter De Coninck. He had a lively life, a weaver who,  along with his mate, the butcher,  Jan Breydel, became a revolutionary leader and was eventually Knighted. (The Baker and the candlestick maker aren´t mentioned  :-D )