Set AS10.
8 Bods, 8 shields (4 lenticular, 4 flat round) 4 swords, 3 spears and 2 axes.
Thier mounts are 2 sets (each set has 4 Nags) of  C1066 H2, Destrier / Heavy Horse.
The 8 Nags from both sets have 5 different poses, a similar set up to the nags provided for the Mounted Vikings, so rather than repeat what I wrote there about the possible pose selection, my review can be read HERE.

I was going to give  the bods Lenticular Shields left over from other TD Anglo Saxon sets. My fisrt thought was that using the Kite shields, wether historically correct or not, would, IMHO, make them look way to similar to Norman Cavalry. But then, I thought, they are Late Anglo-Saxons, and Huscarls and also, they could be used as Norman cavalry...so they ended up with Kite shields
Also, they got the same regimented look as the foot Huscarls.
I´ve also swopped the lances for home made ones. 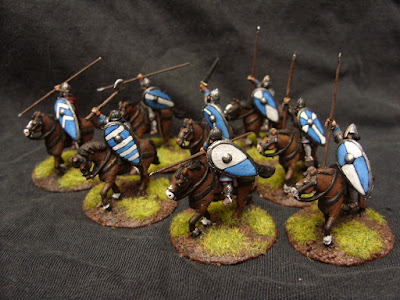 Close ups.
The diferent Nag Poses that come with both sets are numbered.
Number 1 in pic two should be 5 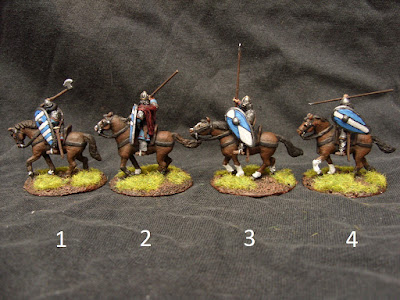 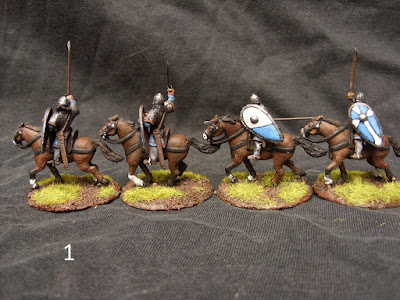 Wether the Vikings used Cavalry in combat is..?..not so provable but Anglo-Saxon Cavalry? Yep, they did have them. See HERE
Posted by Paul´s Bods at 06:29 5 comments: