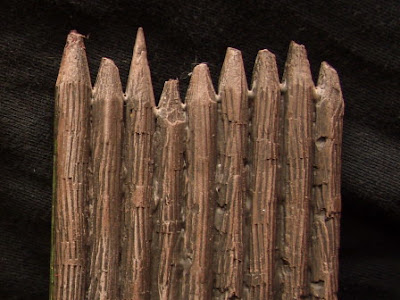 Recently, in a effort to create a wooden Palisade fort and after a couple of ideas that didn´t really work, I came up with this method.
Simply cut old pencils to the desired length, re-model the Surface with a pair of pliers,  which works fine on all different types of pencils, round, 6 sided, even 3 sided and stick them together with PVA. 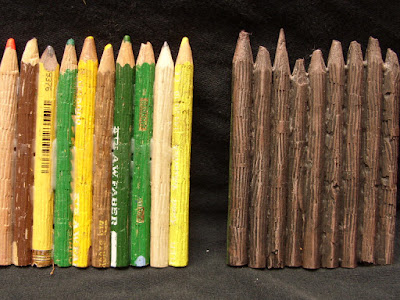 After one attempt with sticking them whilst layed on a flat Surface led to a slightly slanted result I came up with a holder...an old Cassette case.
The pliers have serrations which marks  the pencils Surface with a sort of bark type pattern simply by squeezing. Don´t squeeze too hard as some pencils are a bit brittle but don´t be too soft either. 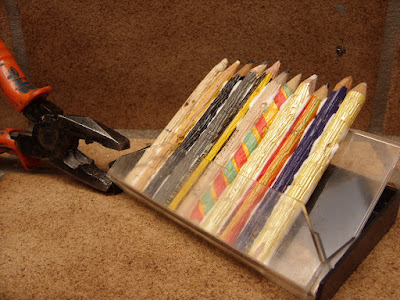 Ok, I´m going to have to aquire a lot of old pencils to create what I have in mind but I discovered the lot above after a quick rummage through cupboards and drawers..
Also,  DIY Shops and a certain Furniture shop whose Name begins with I and ends with A give pencils away for free.
Ok..I´m not going to run off with the whole box on offer but one or two might end up as palisades after a visit. I mean, you put one in your pocket and then Forget which pocket so it´s easier just to take another and then Forget where that one went and so on...or?

Just heard some very sad News. Leonardo Torricini   (Phersu miniatures) the creator of some exceptional bods and extras has passed away :-(
Posted by Paul´s Bods at 06:49 14 comments: