Multi-part, multi-pose, hard, glueable plastic. PSR gives the set a near perfect score, 49/50. They also say that the heads and arms can, with a Little work, be used on each Torso..but without a bit of fiddling,  it isn´t that easy.

For example; Some of the heads have a Long thin tab under the neck others a small thin one,  that fit into an appropiately sized Slot in the Torso. To make the thick tabs fit the thin Slots would mean cutting some plastic away but in the case of the thinner Tabs it would mean filling the gap.
Also, the raised arms are intended to fit to certain heads (third pic from top in the PSR Pictures) and are missing the tops of the shoulders. The scans at PSR Show more or less the range of possible combinations without having to Resort to cutting and filling.

Another pain is the "peg on shields" which, in some cases,  leaves a horrible indentation in the shield. Why, if the plastic is glueable, have pegs at all??

The nags come in two halves and although they Clip together well enough without glue, it´s best to glue them. Lastly, you can´t just sit any Knight onto any nag you please. Some Torsos tit fine onto one or two nag poses, but virtually all of them Need to be forced into place, small gaps between saddle and kiggits rear end are almost unavoidable unless you slightly bend back the rear of the saddle.

A couple of the nags come with engravings on the Caparisons, two have a Horizontal bar and one a cadency mark. I really wish manufacturers would leave the shields, flags, caparisons etc blank!!!
Crested Knights ? 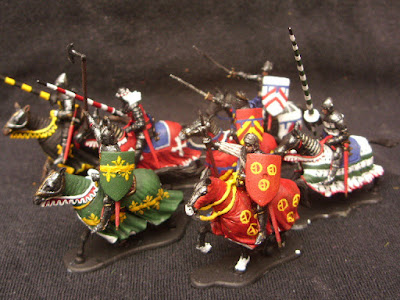 Anyway...I didn´t want to use them for a jousting Scene and even if they aren´t (armour wise) 100% historically accurate,   they´ve ended up as 13th Cent Nobles to go alongside my other Magna Carta bods * and seeing as the majority of the  Barons, Lords   etc had issue, they can be used for later in the medieval period.
Squire. This is the only footbod in the set. Over at PSR they reckon he appears to be Holding a stick, but I reckon he´s Holding a rein....or the deadly red snake of Hiss-spaniola. 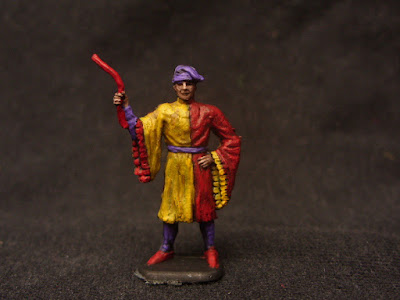 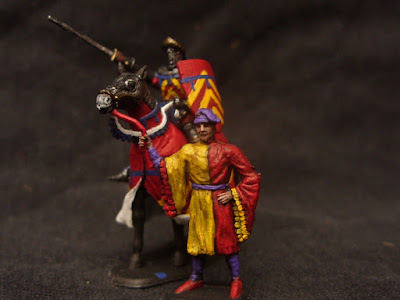 The Baker´s Dozen.
Mixed in with some Valdemar kniggits, painted up as Witnesses to the Magna Carta.
In no particular order;
John de lacy, Saher de Quincy, Richard de Percy, Ranulph de Blundeville, Stephen Langton and his brother, Simon Langton 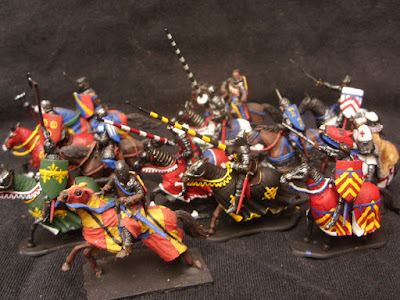 *Along with the famous 25,  there were actually  200 plus Barons, Earls, Lords,  Knights etc who took part in the Enforcement and witnessing of the Magna Carta. Why it´s constantly pushed that there was only 25 I can´t imagine.
A list can be found on the Medieval links page,  Brookfield Ancestor Project - Surety Barons, under  the titel Blogs / Sites (Historical/Re-enactment)
Posted by Paul´s Bods at 08:14 15 comments: