This was the curse that Egil Skallagrimsson spoke against King Eirik Bloodaxe and according to the legend it worked..they, Eirik and Gunnhild,  left.

During the Viking Age to put a "nid" on someone was to put very powerful verbal curse upon them. The idea is to raise the Landvaettir and Hel(a) against the person or people who the curse is aimed at.
The power of words was not taken lightly by the wikings, so to make a curse of this kind was very serious matter. It was the ultimate insult, and used only in extremis.

A horses head was placed on a long (usually hazel) pole and then directed to those who are to be cursed. The words of the curse are written along the pole, and sometimes the horses skin was hung over the pole as well.
Why a horses head? Maybe, and this is only my thought, is that the severity of the curse called for the sacrifice of a  revered animal, horse worship was common in a wide range of ancient societys.

What do you need to make one? Some insulating foam for the rocks, a toothpick for the pole, some tissue paper soaked in woodglue for the skin and any old horses head. 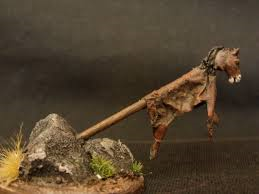 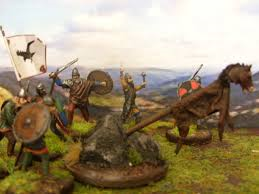 THIS SITE is well worth a look, a 360° view of the inside of the 19th century Serbian Royal familys church,  St. George’s Church, Oplenac, Topola in Serbia.
Click on the picture and use the mouse to turn the picture, zoom etc (similar to google street) Also, the pics along the bottom are interactive...
Posted by Paul´s Bods at 04:27 21 comments: