My main historical period of interest but something I´ve been putting off for a Long while now for a couple of reasons.
1. Ships ? I like the look of  sailing ships but why would I want a medieval ship? I can´t think of any Scenarios I can put one into.
2. The size of it. I´m more used to quick and small Projects. Could it hold my interest Long enough?

So why build it at all?
1. It was there. It´s been sitting on the shelf for years taunting me.
2. I´d got into a modelling Doldrum (wordplay intended)  Nothing painted for weeks so decided to go for something that was in line with my interest but way more complicated than I´m used to.  I ignored the  "what Scenario would it fit to?" and dived in (another dreadfull pun?). Either it would get me back to actually painting anything or it wouldn´t. It worked. During the build I painted the RedBox Crossbowmen who´d been sitting on the Workspace, based painted but gathering dust. 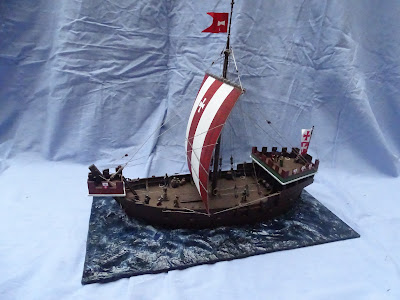 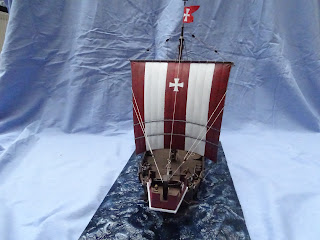 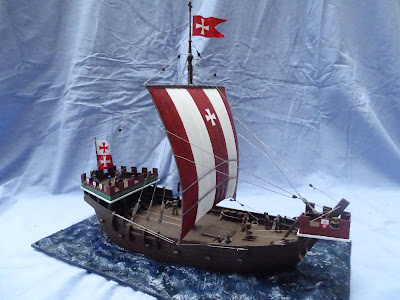 Close ups with Crew and Cargo 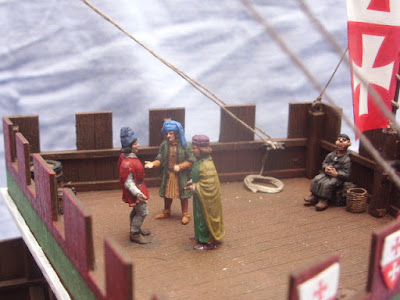 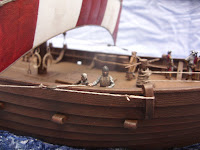 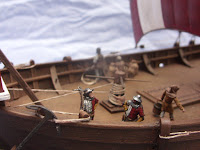 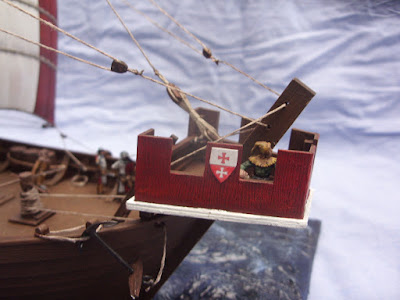 The Build
EEEEEEK!!! There´s loads of it and it´s feckin huge!!! A veritable sea (pun intended) of plastic!!Way bigger than anything I´ve tackled (pun intended) so far. 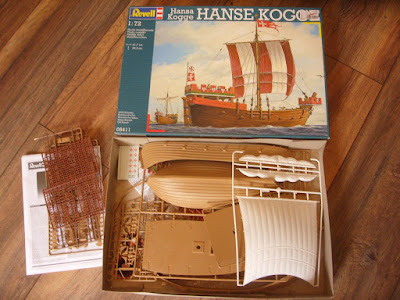 Stage one, the hull. It has to be the waterline Version...I´ve little  use for a medieval cog but absolutely no use for a full hull Version of one.
After all the time spent in the box the hull appeared to be a bit out of line. In the instructions (added at the end of the post)  it says add a strengthening part (G3) but I left this until the ends had stuck. 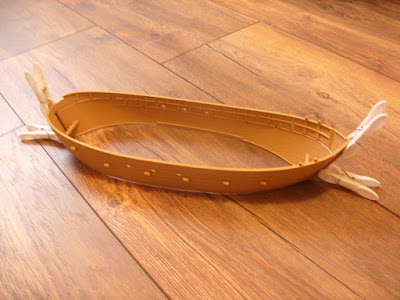 Addition of the strengthening plate and decks. According to the instructions..I´ve skipped a couple of stages. The Addition of G3 pushed the hull into shape. Previously it didn´t have full contact with the Floor, light can be seen under the hull in the above pic but not in the one below. 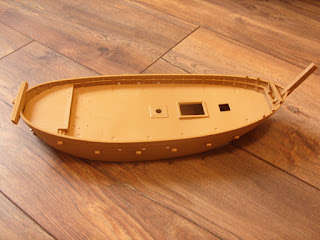 Again, I´ve gone ahead of the intructions and built the upper decks. They are dry fitted as I think painting will be made easier with them loose. 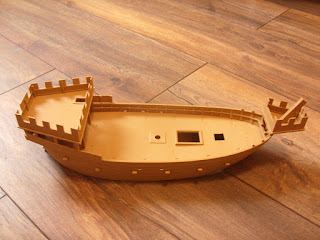 A few other bits put together, winches, mast and block and tackle made ready for painting. 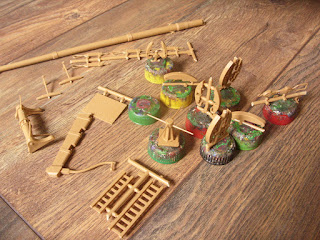 I´ve drilled holes in the "Knees" so rings can be added for Holding Cargo. 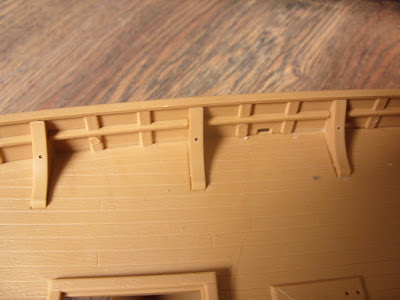 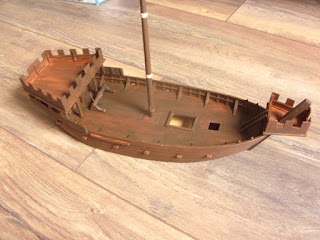 Another thin layer as above  and loads of dry brushing later. 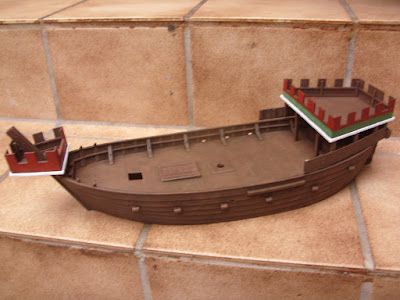 Cargo rings added. These were made by wrapping 0.8 Florist wire around a 1mm nail, then the resulting eyelets worked with fine nose pliers. The camera Settings were set too high so the upper deck colours seem brighter in the pic than in reality 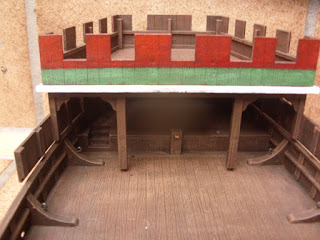 Windlass for the sail roped and attached. Now the Wood effect Looks too dark! I´m obviously no expert with a  camera. The hoops that hold the rope (next to the hole to take the mast) are, OOB, plastic but I´ve replaced them with 0.8mm metal ones. 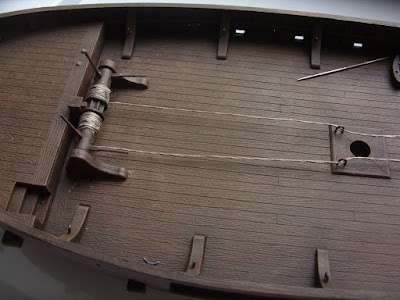 Flag, Capstan  and Anchors attached. The flagpole is supposed to be attached on one side of the deck but it looked better in the middle. I had to make some more eyelets to hold the support ropes for the flagpole and instead of simply wrapping the flag around the post I stitched it on.
I´m not sure how the ropes would have been attached to the capstan, the instructions are vague showing only one anchor rope being attached,  so the solution, wether it´s correct or not,  is mine. 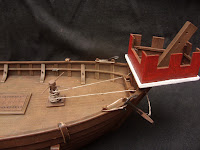 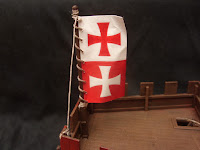 The sail. The canvas area was a doddle to paint, masking tape  to get the lines,  cross cut from masking tape but it wasn´t all plain sailing (another pun ?) The ropes and the spar were fiddly. Getting the painted ropes to match to the thread took a bit of Trial and error. It looks (both in the pics and real life) close enough so will have to do. 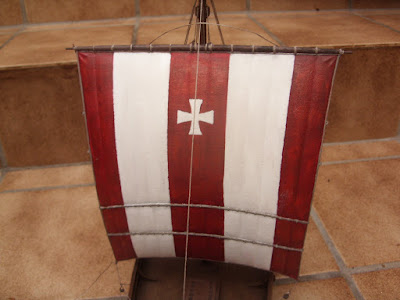 Rigging finished. One tip. The bits that end up load bearing (when Tension is added to the ropes) like cleats, rings etc  Need glueing with second glue. The normal plastic cement isn´t up to the Job.
I made the ropes using darning thread. The thread was too thick but had 6 Strands which, after cutting a length I divided into  into two lots each with three Strands. This was then run over the top of a prittstick two or three times,  twisting it as I went. After  1/2 an hour the strands had fixed together but the thread was still pliable..an earlier attempt using PVA made the thread stiff. 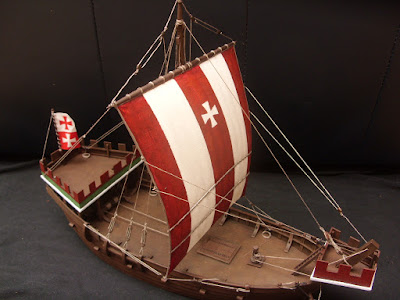 The Crew.
Well, most of the Crew..a couple more were added and I decided against one of them in the pic. A mix of Italeri, Zvezda, Valdemar, Strelets and Orion. 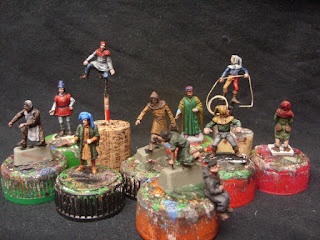 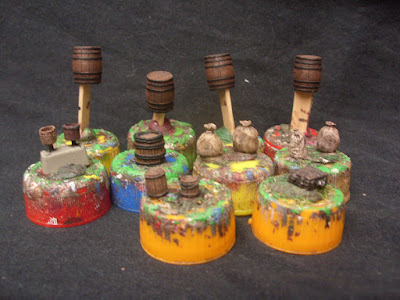 The Basing
At the start of the build I was nervous as to wether I could get a half decent finish..the same goes for the basing but worse as this is a completely new Thing for me.
I pondered what to use for the base...something strong, not too thick and not prone to warping. Plexi glass. Ok, the Surface needed Scratching up to give decent enough adhesion and time will tell if it holds but it´s a first go at it so....
Big blob of acrylic sealant in the middle, ship plopped on top. Plaster of paris added in Basic wave shapes........ 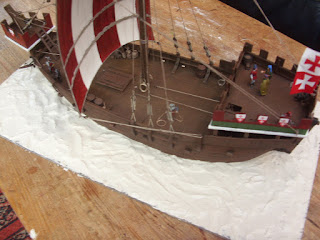 ...after drying, a couple of layers of toilet paper added with thinned down PVA. Then the painting with  acrylics, black with blue and a touch of green..then two layers of gloss varnish

Instructions
A bit blurry here and there, different light Settings  and tipped on thier sides but someone may find them usefull.

What did I learn ?
It takes time to build such a Thing. The instructions have to be ignored, following the stages as they are written would mean inacessable Areas that Need painting. Small parts Need glueing with Second glue if they are to hold.
Was it worth making ?
Yes...and I´ve gone and got me the Zvezda Crusader version to build 😊
Posted by Paul´s Bods at 09:32 13 comments: