Ten mounted bods and one foot bod who appears to be another Conan lookalike
Very little Flash, great sculpts, especially the nags.
Only one small, but solvable Problem. The bods don´t fit that well on the nags. The reason ? Thier legs aren´t wide enough appart to fit over the nags sturdy backs.
I tried the "hot water Treatment" to widen their legs but even then, seeing as there are no saddles, they didn´t seat properly  and fell off.  Normally, with mounted bods, I glue them into the saddle, the glue is then more or less hidden.
Solution ? As the bods needed holes drilled in thier rear Ends to enable easy painting (they get then jammed onto Cocktail sticks which are supported in wine corks ) it made sense to drill a hole in the nags backs in roughly the area where the saddle would have been,  add a short length of wire which the bod was then pushed onto. 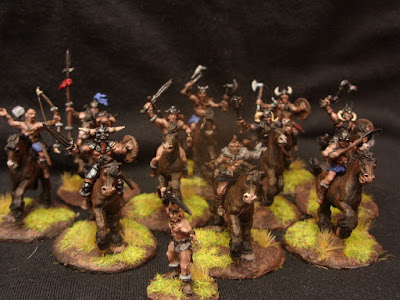 As with the first set of foot cimmerians I gave them reddish hair. 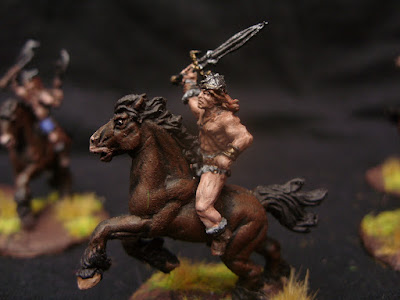 Loads of Fantasy  stuff like maces, Axes and horned helmets 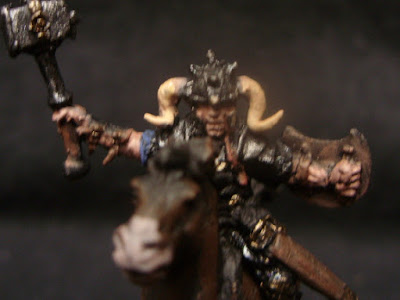 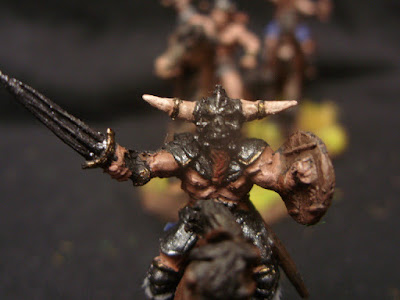 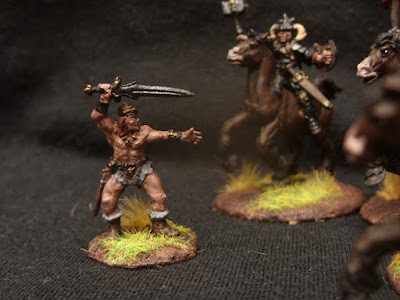 Is the bod meant to be Conan ? I reckon so. The pose and kit are  directly taken from the 1980´s Conan films starring   Arnold Schwarzenegger

I´ve still not given them a  flag (do they Need one?)  but I reckon something with a bull would be good.