"A tholos (sometimes tholus, from Ancient Greek θόλος) is an ancient Roman feature found in the macellum. It is a round structure, usually built upon a couple of steps (a podium), with a ring of columns supporting a domed roof. It has been suggested that the tholos, well provided with water and drains, was where fish were sold, although other uses for the central tholos have been suggested, such as the place where official weights and measures were held for reference or as shrines to the gods of the market place. Some macella had a water fountain or water feature in the centre of their courtyard instead of a tholos structure."

This one´s a bit too big for the new Forum and way to big for the original one (Now a Macellum) which has a water Feature anyway, so it might end up either as a feature on it´s own, or..if I ever get it together, as a centre Piece for a bigger Macellum.

The pillars. Not exactly the effect I was looking for, neat and tidy, but it ended up looking having a bit more of a "used" look.
The Problem with pillars is getting them all the exact same length, especially with Long section like the New Forum. Get one or two a bit too short or longer than the others and it warps the roofing.

The bits and pices needed. A Kebab stick, set square,some corrugated biscuit paper, PVA and some A4 paper.

Simply mark off the A4 paper in strips of the required height and glue to the Kebab sticks, leaving a bit at the end so it can be attached to the flooring / Overhead construction. The set square is used to check wether the paper Strip is at a right angle to the Kebab stick. Get it at a slight out of true angle and when it´s rolled up it gets longer than required.

Simply smear some PVA along the paper and roll it up. Cut some corrugated to the required width and glue on. Paint and Cut off the rest of the Kebab stick.  I´ve now realised I should have cut the corrugated paper into 1cm strips to give the effect that the pillars are made out of sections...but "ya live un learn"  :-)

The old Forum wasn´t quite forummy enough..it lacked a Basilica, so a bigger one has been built. No red paintwork on the pillars..the town was starting to look to much like RTW.

Rear side. Normally, around the courtyard there would have been Shops, but I´ve used a single wall as adding two walls for the Shops would have meant expanding the area of the whole Thing and it would have put the whole town out of `Balance`.

The pillars. Paper and toothpicks ;-).

The whole town so far, 19 of the panned 40 buildings. The original Forum, which will now become a "Macellum". It´s a bit too small to add a Tholos....so maybe I´ll convert it into a housing block or stables and build a new Macelum.

My entry for  a "competition" over at the  Valdemars forum
The rules for entry were; 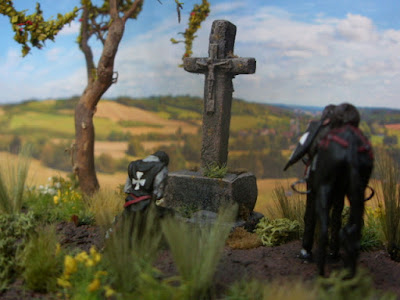 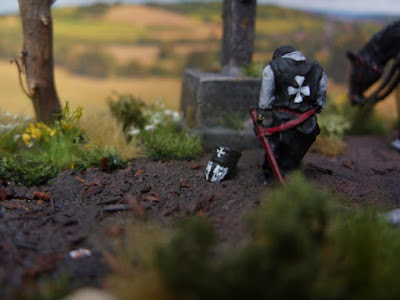 On his travels to the holy land a hospitaller Comes across a wayside cross. 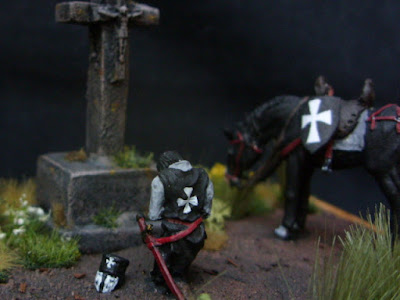 He stops, and as he prays, Dobbin takes a wayside Snack.

Both the Hospitaller and Dobbin are Valdemar. Dobbin came without a saddle so one had to be made. Got it all base painted but it just didn´t look right....no stirrups!!! Remove saddle, recreate with stirrups (very thin plastic Card) add saddle again. 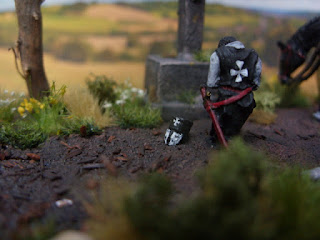 The helmet is from the Caeser Dismounted Crusaders set. 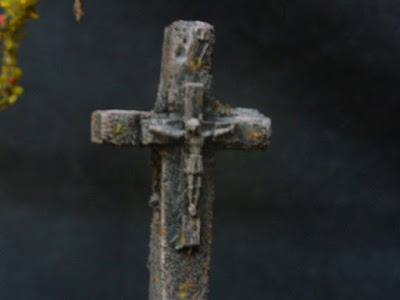 The crucifix is from the Valdemar Tax collectors set and was carefully sliced out of the sedan chair. Not carefully enough...It broke into 4 parts, the right side of the cross shot off into "never to be seen again land" so that had to be reconstructed. The cross it´s attached to is made from high density styrofoam. The moss is tiny bits of old rubber foam.

Veritas vos liberabit ? A variant of Veritas liberabit vos (the truth shall set you free) and was used by the   Knights Hospitaller during the crusades.
Posted by Paul´s Bods at 08:53 19 comments: 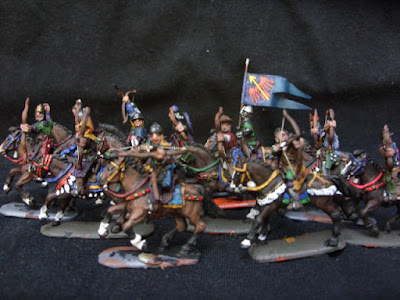 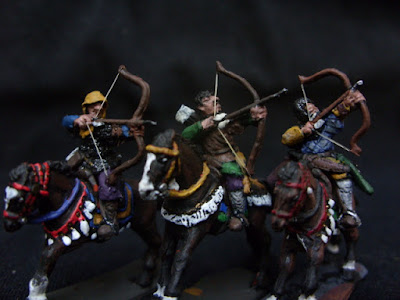 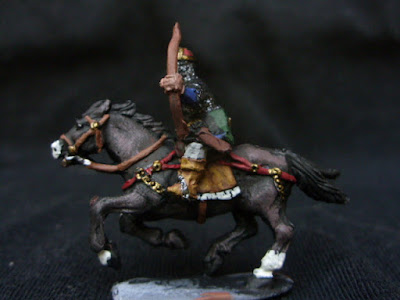 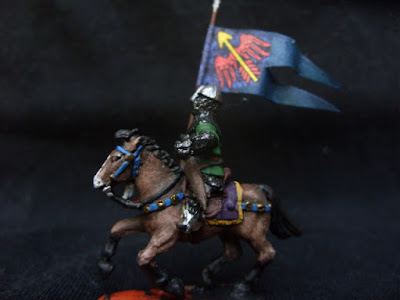 The good thing about Roman buildings..there´s so many different types based on a similar design! :-D  This one could be a pair of merchants residences..not quite rich enough for a town house/Villa but not so poor that they have to live in an insula.

"Lay on! Lay on! Lay on! They fail!"
The "camp followers"..or sma' folk, also refered to as "Gillies". Apparently "Gillies"  is a corruption of the Gaelic word for young men. It´s more commonly accepted they were clansmen, who, at the closing phase of the battle, charged en-masse.

The Standard, is from the Myneris (Menzies) Clan led on the day by Sir Robert de  Myneris. The Clan Menzies still owns a remnant of a set of bagpipes said to have been carried at the Battle of Bannockburn in 1314, though this claim is debated. The Bagpipes have been altered, two of the drones removed leaving  a canter, blow pipe and single drone, so they look a bit more medieval.

What a big sword he´s got!!..and judging by the flock attached to him (bloody static!!) he´s been hacking the grass.