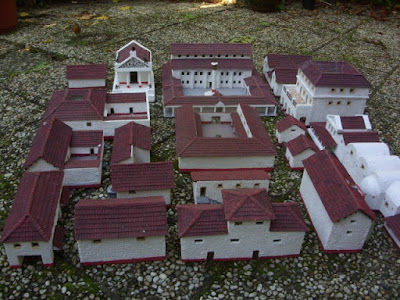 The Project came to a Close a couple of years ago and basically the whole lot was destined  to spend its future in boxes in the cellar so rather than let it go to waste I put it up for sale HERE
There (in the cellar) it remained until a couple of weeks ago when I got a message asking wether it was still up for sale and what scale it is.

Anyway, to cut a Long Story short it is now part of an interactive Project called "I Think I can" run  by the RSC..yep..the Royal Shakespeare Company in association with the Terrapin Puppet Theatre using the Buildings and 1/72nd scale bods (the roman citizen sets from Strelets and Linear-B) as the characters.
The idea of the project is;

Through puppetry, live video, and audience interaction, this innovative public artwork asks 'What would you like to be today?' engaging you in an optimistic task of collective storytelling


It starts tommorrow, the 25.07.17 and IMHO, it´s a great idea, just the sort of Thing I´d have been into as a nipper and I wish them all success with it.
Here´s a sneak Peak Video of the Project...recognise any of the Buildings?


As our puppeteers animate the character in the miniature Roman world, you are invited to tell your character's story, which is then documented and will appear in the form of an online newspaper

Link to the Newspaper HERE