As noted at PSR;

This gives us nine poses, which is quite a good number for a cavalry set of this quality, so we feel quite guilty in pointing out that a figure firing his musket from the saddle would have been a really useful pose (perhaps instead of one of the swordsmen) 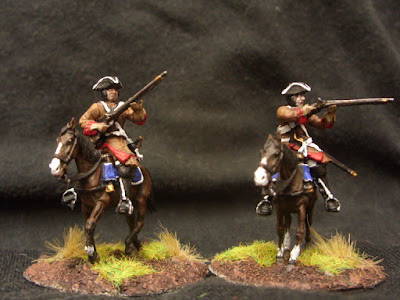 Top half of the Standing bod, bottom half of one of the one´s with sword in Hand, a bit of carefull cutting to preserve the Sabre (sorry, sword)  and cartridge box.
Hole drilled through both the legs and Torso.  Both are then joined using second glue and a filed down end of a toothpick which was jammed up through the legs and into the torso.
The other end of the toothpick is then stuck into a cork for ease of handling whilst painting.
When finished, toothpick is cut to length (snipped off so  a half a cm or less is left sticking out under the rider) and the rider stuck to the nag by inserting the short length of toothpick into  a pre-drilled hole in the saddle.