Buiding permission granted, the next lot of building can begin. First up..an "out of the head" build.

Materials needed;
Card..Pizza boxes are great..but any heavy Card will do..even old LP covers.
Pen . Black is best.
Sharp modelling knife and scissors
PVA glue
Some flyscreen netting (or similar) and sellotape for the Windows.
Acrylic wall paint, White, dark Brown, bit of yellow...and a bit of talcumpowder to thicken the paint.
A bit of fine sandpaper.
Some polystyrene foam.

The plan of the house with all four walls. The side walls haven´t had the beam pattern added entirely as the house will be attached to another house on one side (and possibly both sides)
Roof isn´t included.
For 1/72nd it´s best to Keep the height of the floors between 3 -4 cm´s. It doesn´t matter if the bottom floor is say 3 cm´s and the one above is 4 cm´s, any combination of heights Looks normal.
Doors Maximum 2.5cm´s high and 1.5 wide. Windows?...if they Look ok sizewise.. then they probably are. Aesthetically,  it looks better if the window ledge starts at around 1.5cm´s above ground Level

This house will have two 0.5cm jetties (the floors that stick out over the floor below) and they will be constructed by simply leaving a gap (the strips with the arrows) between each floor. When it´s cut out I simply score along the lines and bend each into an "S".
The biggest I´ve made the jetties so far is 1cm deep, roughly 3 feet (1m) in reality..any bigger Looks a bit overbalanced.
Important to remember the jetties Need to be taken into account when drawing the side walls, and to take off the 0.5cm´s per jettie (1cm) when calculating the height of the side walls.
Example, front has three floors @ 3 cm´s + 2 jetties @1cm = 10cm´s. The side walls (if they aren´t to have jetties as well) will be only 9 cm´s high in total
The "T´s" represent the Tabs for glueing the walls together or to provide a surface for attaching the Roof .
The "squiggles" are where the doors and Windows will be cut out.

The front cut out, scored and bent into the "S" shapes to create the jetties

The Tabs folded and glued. The shiny side of the Card glues easier after a quick rub with fine sandpaper.

The side walls attached. I don´t attach the back wall as it makes adding the Windows difficult.

Painted. First I paint the Areas between the beams, then the beams. The Paint is normal acrylic based wall paint with a tiny pinch of talcum powder to slightly thicken the paint

Next..Windows. Bit of flyscreen cut to size and sellotape over the back. For Windows with a "Frame" in the middle (top left of pic) I add a smear of PVA to the middle.

Back wall can now be added. Now the Rooftiles/shingles. 1 cm wide strips marked off every 1/2 cm and then the Corners snipped out between each tile. A Mind nummingly boring Task.
The tops tiles are made with a 1cm wide Strip marked off every cm, then scored down the middle.

Before I paint the Roof I add the Dragon post Ends and the Dragon beams. All made from Strips of styrofoam.

The chimney. As the houses sometimes get joined together it means the roofing can´t always be finished until the next house is ready and attaching the chimney isn´t always possible so I create a handfull of chimneys at the same time.
Materials, high density polystyrene, the brickwork scored with a pen.

The doors. Scored Card, dark Brown base, dry brush with light Brown. I make up the doors in strips and cut off  sections as needed as it´s easier than scoring and painting each door individually.

That´s about it really. With drying times for the glue and paint, the whole Thing (except snipping the tiles) takes about three hours tops.
Posted by Paul´s Bods at 08:10 13 comments:

Another Little scratchbuild for Bodstonia, a fishing boat which will see Service on the great lake and be anchored  at Boddington.
Again, all scratchbuilt, mast an old Paintbrush, anchor chain from old jewellry chain, Tiller a toothpick, deck hatch flyscreen material etc etc.
It was going to be the Basis for the Ship mill but it didn´t look right, too oval shaped but the hull was already finished so why waste it, and my Daughter insisted on it being finished  so we can take it to the local Pond and float it. 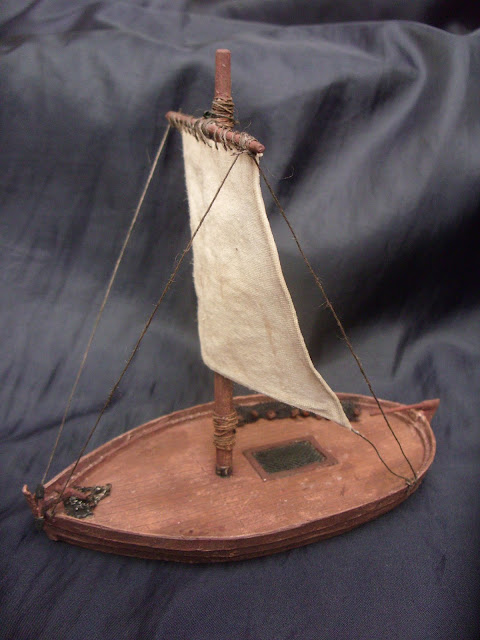 The fishing net is made from some old flyscreen material with  some broken tackle blocks from a 1/100th scale ship kit as floats. 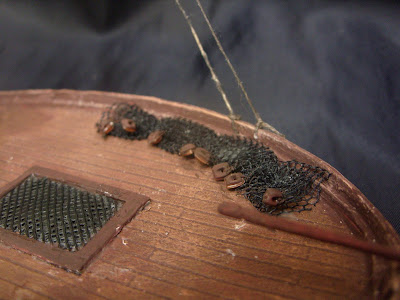 I saw a way of shaping sails over at Vol´s Blog A miniatures Hobbyroom on his post  Scratch Built 1/1200 Third Rate 80 Gun Ship of the Line ,look at the link,  you´ll be amazed  how small and beautifull the finished ship is.
Vol´s sails turned out looking lovely  so I thought I´d give it a go.
Stupidly, I used  material, a Piece of old Cotton sheet. Even after the PVA had dried it didn´t hold it´s shape which meant I had to Hand sew a length of thin wire into the bottom to create the curved effect.

Still, I know know why it went wrong...The relative size. Vol used Card and his sails are tiny..so next time  I´ll use the same  method to shape them but the materials I used fo the Pirate Cutter, a Sandwich of paper between two layers of micromesh net curtain. 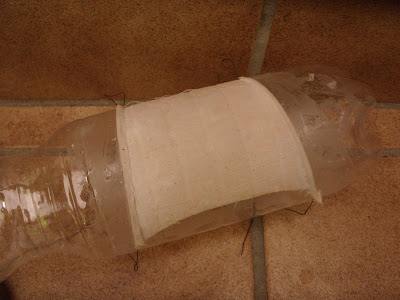 The "Tomplot Blenny",  on the local Pond. 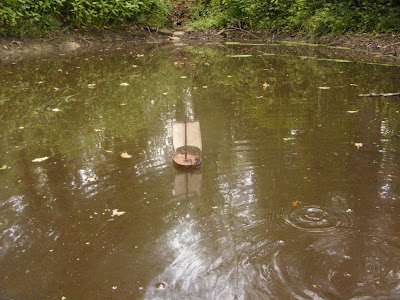 Email ThisBlogThis!Share to TwitterShare to FacebookShare to Pinterest
Labels: Boats and Ships, Federation of Bodstonia, Making bits for bods 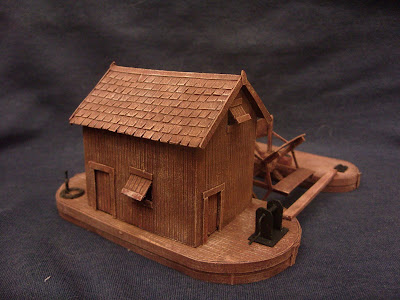 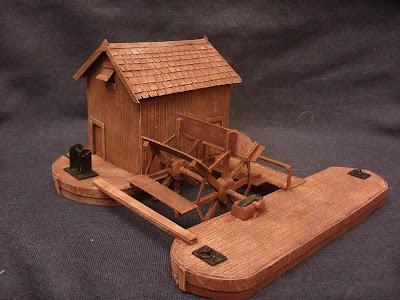 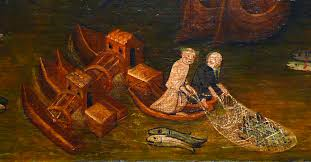 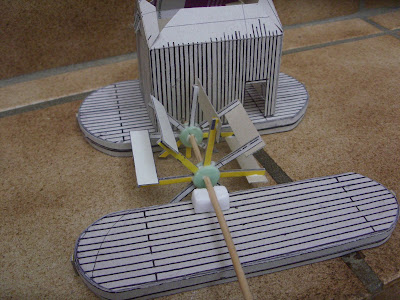 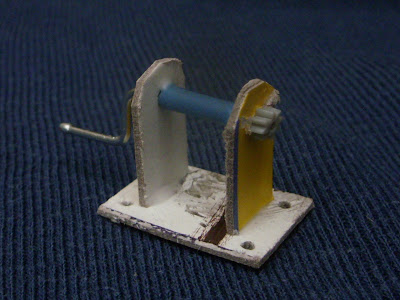 ...also to be used in Bodstonia
50% of it finished ..planning permission for the other half has been asked for.
25 individual buildings (some stuck together in Groups of three or 4) 23 scratchbuilt from Card, the other two from Fredericus-Rex.
The idea to create a housing block was abandoned after I turned the Corner around (the White rose cafe and attached houses) and it created a new street. I prefered the effect that was created.
Just visible (top far left second row of buildings)..the last house hasn´t had the Roof tiles added as it will have another building attached.

I´ll have to work out what I´ll use for road surfaces but  as I´ve said..it´s far from finished and the layout might Change as more buildings, town square with fountain and especially functional buildings  like a smithy, Stables etc  are added.
Cost of the Project so far? €6 for A ltr of woodglue, €3 for a combined (Brown, White and a bit of yellow)  litre of acrylic wall paint ..a wee bit of talcumpowder to thicken the paint...10 euros tops..works out at less than 50 Cents a house .

One for the purists. A common perception is that there should be at least a small Stone/brick plinth /Wall supporting the beams on the bottom floor.
Not always..Just a couple I´ve found without (or the wall painted black)  since starting this project
Weobley, Corner House and Red Lion Inn
Bowes Morrell House in Walmgate
From Machynlleth Town
Weald and Downland Museum (the medieval shop originally from Horsham)

I wasn´t really that satisfied with the look of Some of the buildings I first made (Card Houses Post) so they have all had a make over, for example the roofing changed and chimneys added.
One of the three storey houses was cut in half and had the lower floor removed..there were simply too many three storey houses and it was getting a bit of a  "all the same height" look.
Also..some housing / Workshops are needed for the lower orders and artisans.

The Weekend approaches so I´ll get stuck in and hopefully get the rest finished!!!
Posted by Paul´s Bods at 05:44 5 comments:

Another Addition , this time a "Corner building" and based on, what is now,  Gert and Henry's Restaurant, Jubbergate, York.
I originally found a Picture which Shows it with a large  White Rose on the front  and called, logically enough, the White Rose Cafe.
I´ve left the rose off and Extended the Roof over it´s gable end.

A really good resource, sometimes with scale plans for Timber framed houses  is BHO (British History Online)
I advise using the search function as the site is huge and can be a bit confusing.
Posted by Paul´s Bods at 05:27 4 comments:

Another two additions
The middle house is based on a real life one (but I forgot which one and I´d also  deleted the pic  found on the web...doh!!)
The one on the far left is made up.

The Housing block so far. Another 8 or so to go to complete the square.

Still..IMHO they look better than the printed Versions. :-D
Posted by Paul´s Bods at 06:36 9 comments:

The "Yellow house".
This one is  based on another house in Broadstreet, Ludlow.
I couldn´t work ourt exactly how the beams on the top floor (here they are called"Andreas crosses" ) had been positioned so I went with vertical beams as with the first two floors.
A bit of modernisation has taken place..chimneys are being added.
﻿﻿

Added to the two previous buildings.

A recent trip out revealed another candidate for a model based on a real building..a barn with house attached at the back.
The Thing is massive, roughly 23 meters Long and 12 meters wide.

The Museum inside the Castle has some great bits and pieces...like the carvings on one of the staircases and in the ceilings...the one in the Picture is about 2 meters across.

And, last but not least, flagged up on Volomirs blog , a georgeous Diorama by Francesco "Franciuus" Farabi.
Simple is design but the layout and the use of colours etc are expertly excecuted ...just lovely.
A Sherwood Tale