Turning  a bit  Medieval here at the Moment...17th post of the year and it´s looking as if the next couple will also be medieval themed.
Another Little group of bods for the 1329 dio, VA177 "Ship Crew" by Valdemar Minis.
11 bods and one  hound.
The whole Crew and hound. Exactly what the one (leaning on the hound) is doing or meant for, I don´t know. Hauling a rope? A Scene from Shakespeare? 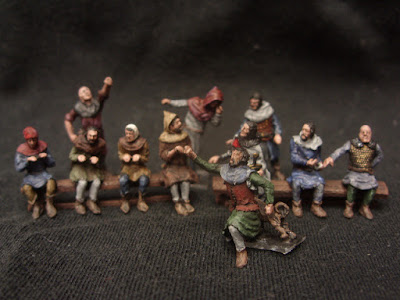 Sitting bods. The kniggit I´ve painted in the Town Guard´s colours. Maybe he´s the captain of the guard off to make a closer inspection of some of the ships. 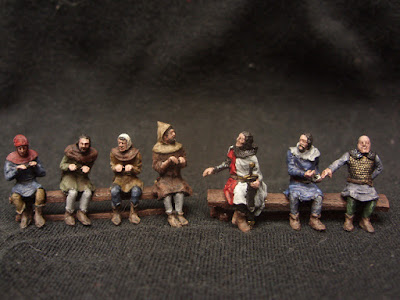 Which one of the  finalists of "Village idiot of the year" will win the rabbit impersonation contest?
I don´t think Willard Red Cap has really got the idea but, then again...I suppose that makes him more of an idiot than the other three. 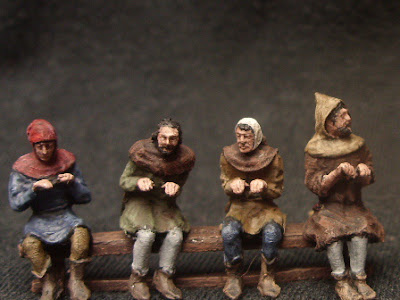 The hound´s pose is Forward leaning as it´s meant to be Standing up against the side of the boat. 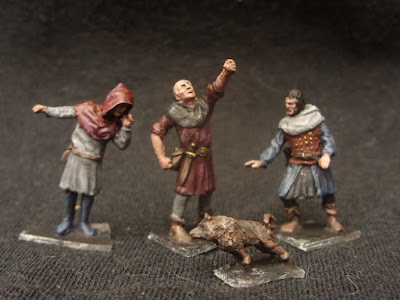 The set Comes with 4 oars..which I´ve painted but not attached to the bods as  (I assume) they can only be added when the bods are in situ.