Roman Forum, the central area of the city around which  life revolved. Here was where commerce, business, prostitution, religion and the administration of justice took place.

...or discuss (sometimes loudly) the politics of the day.

The water well is made with high density insulation foam and the face of a Lioness from the Atlantic Gladiators and Christians set.  The water is made from a Piece of CD casing which is then smeared with Pattex100 gel. The trickle of water is made from Pattex 100 gel

Recently I got an amazing comment concerning an earlier post, Simon Langton and John FitzRobert, two of the suretees to the Magna carter,  from his descendant Joel langton. He and his Father run a Website about the Langtons called the Lost Langtons. It´s a pretty amazing bit of Research work and well worth a look.
Posted by Paul´s Bods at 04:32 17 comments: 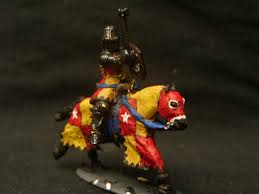 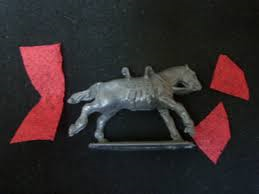 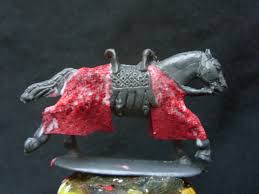 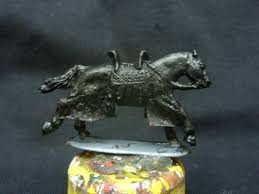 
For those interested in medieval art, then  Matthew Ryan´s Site is well worth a visit. Stunningly well detailed drawings of medieval soldiery
Posted by Paul´s Bods at 04:45 17 comments:

Well, not really, it´s an as near as possible Repro of  Gnaeus Cornelius Lentulus Batiatus´s ( Vatia ? ) house from the Spartacus series but the living area  hasn´t got the Atrium impluviatum  style roofing. I was going to add a wall to what would be the Training area but it fits better into the town as it is and can double up as part of a Shopping street.

The pillars made from dowling pegs and rings of copper wire glued to Card, then the peg glued on top.

The whole town so far. A Forum, a house with  Atrium displuviatum style roofing, Lupinarium planned....an old Arena to upgrade...how big can this get.?

Dark and Light Alliance - Light Warriors of the Dead

The light infantry, 40 bods, 4 sprues at 10 bods each. Very little Flash, in fact the slinger was the only one who had any and that was on the shield which made it easy to remove.
As with the Heavy infantry  they appear more battered and campaign weary  than actually "Undead" looking and again, as far as I´m concerned, a Bonus.
Firstly painted as  circa 12th century marauding Bandit Viking - Norman - Saxon mix type medievals

And painted as "Undead"

High walls and few Windows facing outwards to prevent Robbers, this house has a small shop.

The "Backyard" (Horti) Basic and not as nice as it could be..maybe I´ll build a better (bigger) house with a full Horti, pillars and all,  at some Point.

The Atrium. The Roof is of the  Atrium impluviatum style (Roof slopes inwards to the courtyard) as opposed to an Atrium displuviatum (Roof slopes to the outer wall of the house and away from centre)   The construction needed to Support the roof meant that it wasn´t possible to add an Impluvium, so, as with the Horti,  maybe at some point I will re-think the roof construction and build a more historically correct version.

And finally Edward II. Born 1284,  he would have been 13 when in 1297,  William Wallace was starting the uprising along with William the Hardy, Lord of Douglas. So yet another reason to scream at the´Historical innacuracy in the  film Braveheart,  as the actor playing him, Peter Hanly, (who was 29 -30 years old at time of making of the film) is definately NOT 13 yrs old!!!

Camp Scene. They will end up as part of what will be  more representative of the english camp  than a scottish one, but some of the bods can definately be used for both. All the bods come from the Strelets Medieval Britian set. (from which I´m still missing 12 poses )