Converted yesterday..painted today. The first pic shows the archer conversion from the post about swopping heads.(Actually, not only have they swopped heads...but by the looks of things...sides as well!!) 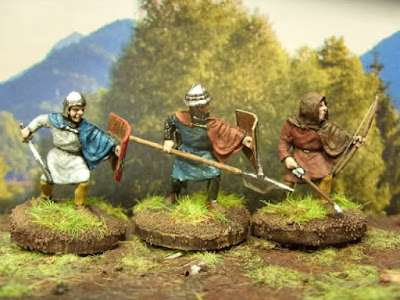 All the same figure..the "assassin" (far right) has had an arm swop from an Italeri archer, bow + hand from the running bod in the same set, hood made from ....toilet  paper :- D 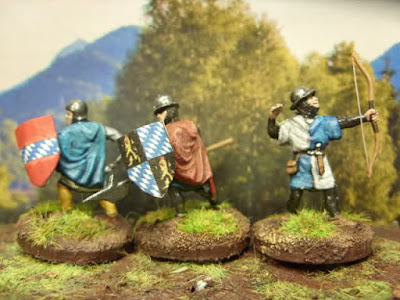 Shields are printed and stuck on thin cardboard and then simply attached to the bods with Loctite 401.

This is a quick article on how I swop 1/72nd  scale bod heads.
First I select two likely candidates for the "exchange" One doesn´t know it yet, but he isn´t in on the deal, he´s just a doner bod , so shhhhh

In this case I want to create an Airfix bowman wearing a helmet and the Revell english Knights set is of pretty much the same size. 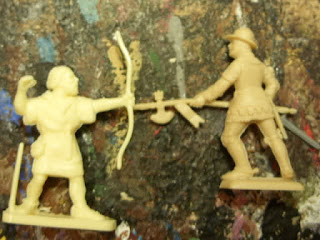 The heads of both bods are removed, leaving as much neck as possible on the head that will be "re-fitted".
Both doner head and new body are matched with each other, to see if the angle of fit is correct and if there is too much neck left that will nead cutting away.

The head then has a pin pushed into the top of it. At this stage pliers aren´t necessary to push the pin in, but I do recommend the type of pin in the photo below. It saves on holes in the fingers!!!. The pin has to be looked at from the side and the front as it is pushed 1-2mm into the head, to make sure it is properly aligned so as to come out more or less in the middle of the neck area. 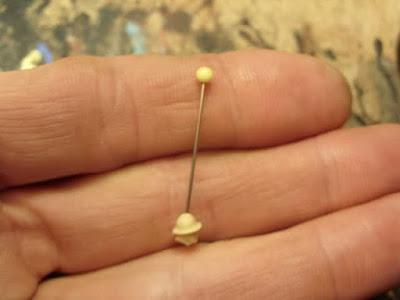 Now using a pair of pliers the pin can be pushed all the way through so that it sticks out of the neck area. If it at this stage is misaligned, then one further attempt can be made but in my experience after that a new head is required as the holes made tend to join up with each other making it near impossible to fit the head at all. 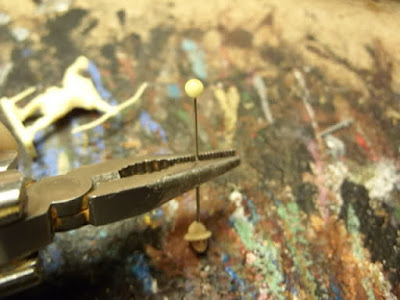 The head and body are held together to check final alignment, then holding the body in one hand , the pin is pushed in using the pliers. 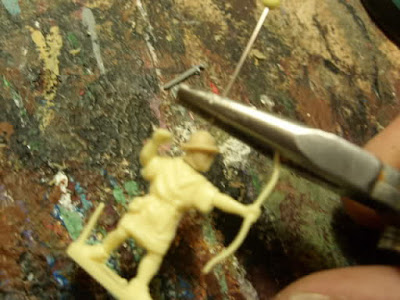 When the pin is pushed in 4-5mm, the top of the pin is now cut off as close as possible to the head, and using a hard surface (here my cutters) the rest is pushed flush with the top surface. 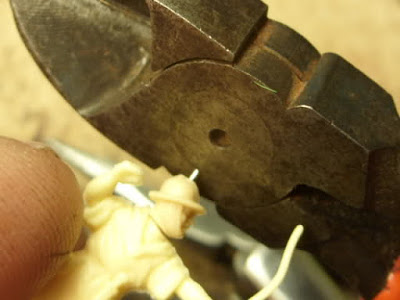 A bit of re-positioning of the head is still possible, twisting to the left or right and maybe even forcing side to side, forwards backwards, but it is a minimal amount.

Fill any slight gaps with woodglue. 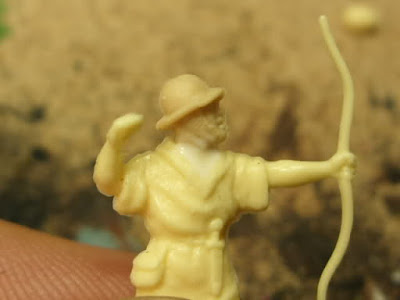 If I was to go "wild" on this one, I would have cut away the hood at the back, some of the clothing around the neck and recreated  the chain mail around the neck with greenstuff /milliput... :)
The same technique can be used to join body halves, arms legs etc. even two halves of different horses. The whole process, including photos took less than 5 minutes.

Of course, a hole can be drilled through the head and into the body and a piece of pin used to fix the head in place but I find this a slightly quicker method.