As a (another) small side line to  Medievals I´m going to make a small Imagi-nation army for the Federation of Bodstonia.
General idea is that it will be based in the 18th centuary and to use any sets that have Tricorns to form the regiments. That Native american indians get to play a role won´t actually mean that it´s in America..we´re talking parallel universe here :-D
Flags will be the big headache but there´s time.
These bods were kindly sent to me by  Dalauppror from Dalauppror Blog. They came at exactly the right moment as I was slowly running my ideas for medievals into a corner and the break was just the thing. Mind you..looking on his blog today gave me another idea (he always has great ideas) for dark age bods.
Many thanks mate :-D 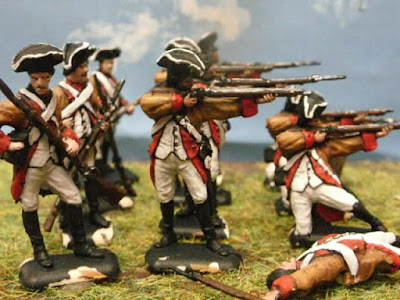 These Italeri Amercan infantry (AWI)  Along with them was also sent the  italeri American Indians and the Nexus Davy Crocket set which will be perfect for Trappers, scouts etc. 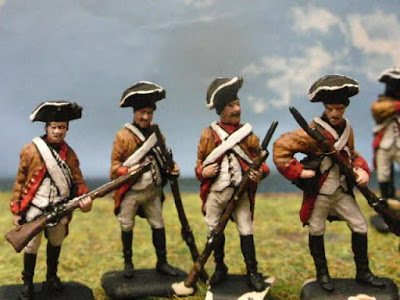 The bods arrived still attached to the sprue but already black primed and there were some clever little conversions already carried out :-D For instance, the one far right was a drummer.

Why this colour uniform? Because the guy who raised and funds this regiment is called Colonel Coleman and he like´s his Mustard.
Posted by Paul´s Bods at 06:03 19 comments: