A question was asked recently over at the Steve Dean forum...how to work out the size of a roof. Normally I would just go for try and error to get the sections the right size, leading to a lot of wasted roofing material  but after ´thinking about it I came up with this;

Welcome to Tyla from Obscure creations Blog. She´s building a dolls house and, I don´t know about you but I find the things fascinating. Not only that but some of the techniques used are very usefull in all forms of modelling.
Welcome to Andy from Cold War Gamer blog . Everything cold war period but in 20mm and a huge amount of resource links.

PS; Due to the screw up with the Bloggroll list thingy, I couldn´t go through the horror of deleting ang re-doing the thing so I´ve just added a second one..much easier :-D
Posted by Paul´s Bods at 04:24 17 comments:

The second medieval house from Fredericus-rex,  town house with shops number 1.
I won´t repeat my  ideas and details as The Town House number 2  only that I´ll add that I´ve come up with a couple of tricks to speed up the building of the house.
1. Pinning the sides together with pins as I glued the wall sections together. This prevents them from falling apart as the next section is attached. The pins I removed after the joins were dry.
2. Using bits of the lasercut sprues to reinforce the internal (unseen) corners. This lends the unfinished construction stages a huge amount of extra stability and helps keep the walls square when duriing later construction.
3. Prepainting the etched wall sheets before adding them to the building. This is not only quicker to do as they are all on a flat surface but the overall colour is then consistant.

Hello to Michel from Michels Miniaturen Blog. Everything 1/72nd and mostly in my favourite period, the Middle ages. IMHO, Michel is one of the master dio creators...his blog´s well worth a visit
Posted by Paul´s Bods at 05:03 23 comments:

Email ThisBlogThis!Share to TwitterShare to FacebookShare to Pinterest
Labels: Buildings for bods, Fredericus-rex

Built in 1880 and named after  General Sir Arthur Diplo-Macy of the Kensington Diplo-Macy´s.

Due to Navy regulation 2189.section A sub section 12, the names of Boats and ships in her majesty´s Service are not to include any Hyphens, so it had to be dropped.
Sporting an 18pdr gun, top deck gatlings and chugging along at the stately speed of 6 mph, this is the absolute power on the rivers of Khandibar.

Hello to Ender from Ender´s Games Blog. He´s just kicked off with blogging and his first post, Zvezda Vikings is a real good one!

And for all you Fans of 1/72nd Bods, plastic, metal, resin or whatever and all associated  with them, planes, trains and automobiles, ...look HERE  ;-D
Posted by Paul´s Bods at 06:58 22 comments:

A good set this one..you get 4 sprues of 24 giving a total of   96 bods !
I´ve already painted the heavy infantry up as Normans but I lost interest in the light infantry until now and the start of an early crusades Army.
Part 2 of the Medieval Cog..I didn´t get much further than the planking but I did have a coulpe of bods to paint...

These are destined to become part of the Croeburn 1813 dio. Not my usual period of interest and it´s been a right pain trying to find any reference pics for them  so any tips would be extremely helpfull.

Many Many  thanks for all the nice comments about the Pirate cutter..you´ve all given me inspiration to have a bash at a couple more.

The rigging took a whole day and I know it´s not what  rigging would really be like..there are mistakes and compromises all over the place..but finally it´s done and dusted!  I´ll add a couple of little bits and pieces, rolls of rope, another gun or two, one of those swivel guns but basically all that remains is a name.

Total cost. In real terms..20 cents for the mast and 50 cents for a roll of thread.Paint and glue..about 30 cents worth (industrial batches bought a while ago)
And now all the stages ..(that I took pictures of)  in one go... 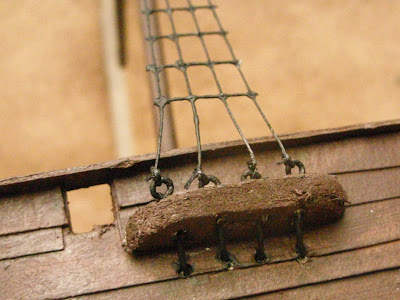 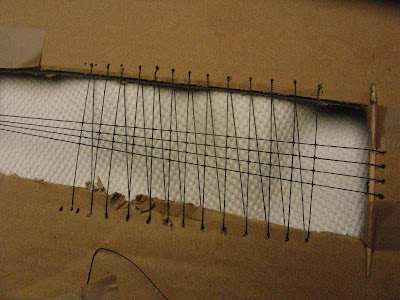 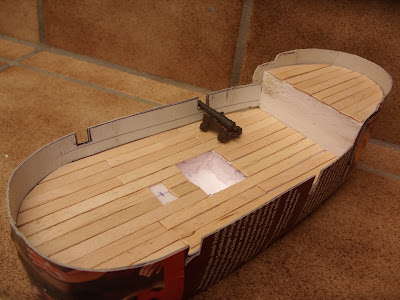 Email ThisBlogThis!Share to TwitterShare to FacebookShare to Pinterest
Labels: Boats and Ships, Federation of Bodstonia, Making bits for bods

Order of the Holy Sepulchre of Jerusalem

Two members of the Order of the Holy Sepulchre of Jerusalem. (Ordo Equestris Sancti Sepulcri Hierosolymitani, Equestrian Order of the Holy Sepulchre of Jerusalem .. try saying that when your drunk)
One of the 5 oldest  of the Military orders, along with the Templers, ( Pauperes commilitones Christi Templique Solomonicthe - Poor Fellow-Soldiers of Christ and of the Temple of Solomon  ) Knights of Lazarus    ( Ordo Militaris et Hospitalis Sancti Lazari Hierosolymitani  -Military and Hospitaller Order of Saint Lazarus of Jerusalem )  the Knights Hospitaler  and the Teutonic Knights  ( Ordo domus Sanctæ Mariæ Theutonicorum Hierosolymitanorum - Order of Brothers of the German House of Saint Mary in Jerusalem )

Enough of the history....
These were painted for a comp at Valdemar forum, Rules,  to have at least one horse, one knight or sergeant from one of the military orders, water and sand. After a lot of research I couldn´t find what symbol a sergeant of the Order would carry so I´ve gone for the basic red cross.
During my searches I found a really good site about the military orders..the Catholic Encyclopedia, tons of info and links. 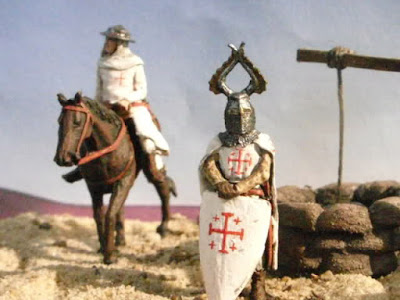 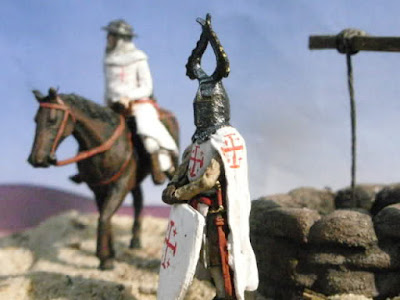 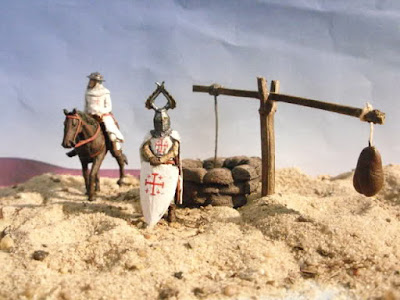 Richard, after coming home finds that some Lords, including Sir Hugh Jarse, have been causing a lot of trouble. raising taxes and generally abusing the population. Richard sets up camp near the coast, calls his war council together and makes his plans! 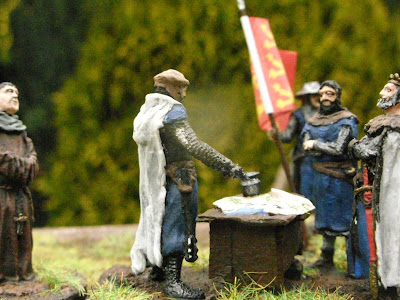 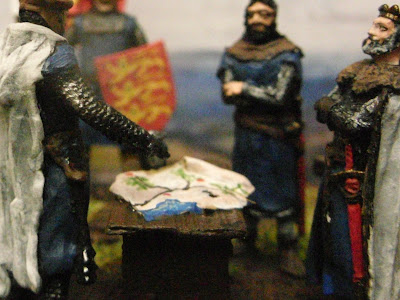 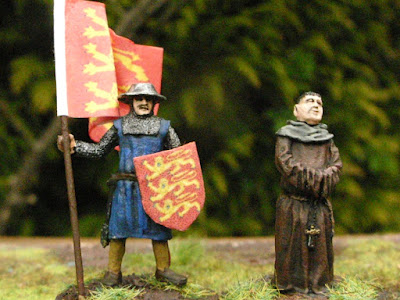