Using the Airfix ACW rules with slight adjustments to move and range differences. All troops have been graded the same, ie; no Advantage as veterans or disadvantage as raw recruits and the Addition of a "funny coloured stick"
The Confederate cav form column and move against the Union right flank. The Confederate artillery open fire on the single Union gun on the opposing hill but all shots fail thier target or cause no damage as one of the gunners throws a save.
Three regiments of Confederate inf advance against the Union left flank and come under fire from the single Union gun. The Union aim goes of to the left and hits (on a bounce) the 28th NC, who loose a man. The 3rd South Virginians break free of the Woods and make a dash, hoping to beat the 84th New York and the 7th Winsconsin infantry to the fences.
﻿ 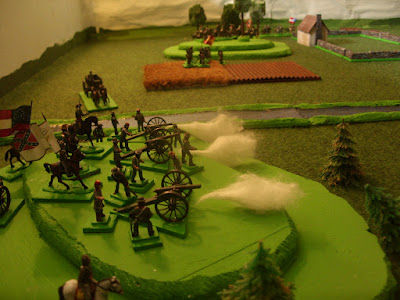 The Union cavaly and inf on the right flank move into the Woods to oppose the advancing Confederate cavaly. The Union inf fire upon McNiells Rangers taking out 2. The Union cav swerve to the left to avoid the larger confederate cavalry force. The Union guns fire on them  but miss.
The 22nd USCT has now reached a cornfield and Comes under fire from the confederate guns and looses two bods.
The 3rd South Virginians reach the relative cover of the fence before the Union bods but as the Union has moved it´s gun down from the hill, they come under a withering fire.
The conferate artillery try thier best to hit the 84th New York and the 7th Winsconsin but both shots go wide, a third bounces over the Zouaves line. 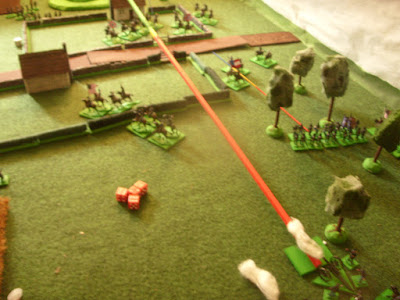 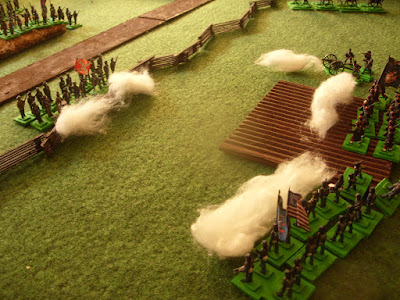 The  Fire fight intensifies with the 84th New York and the 7th Winsconsin moving slowly Forward with their supporting gun moving into cannister range. The 3rd South Virginians , despite the soft cover, loose another bod to the combined rifle fire and Grape shot, thier own return fire missing it´s mark or causing no damage due to saving throws. ...maybe they can´t see anything due to the Cotton wool?
The Union cavalry, just manages to avoid a clash with the numericaly superior Confedrate cavalry.  McNiells Rangers, who are in hot pursuit come under fire from the 22nd USCT and loose a further two bods..they throw for morale, fail and head for home, running into thier own cavalry causing a bit of a jam.
On the Union´s right flank, "Jennison's Jayhawkers" sieze thier Chance and swiftly ride around the confederates left flank....to attack the confederate guns maybe?
The Confederate guns? What have they been up to? During all this they´ve had only one target, the 22nd USCT but seeing as they are now behind hard cover thier fire has had no effect. Firing on anything else would mean the possibility of hitting thier own so they Choose not to. 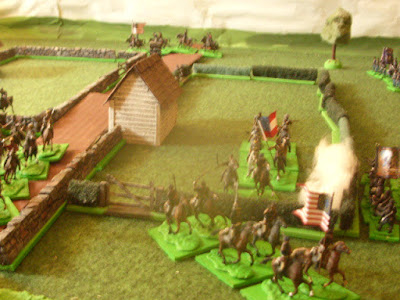 The Union Cavalry engage the 3rd Texans, each side recieving one casualty 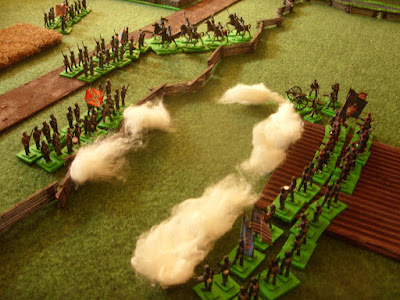 Both the 84th New York and the 7th Winsconsin Charge the 3rd South Virginians, who by now have lost 8 bods, throw for Moral, loose and run. This has a ripple effect along the conferate infantry line, with the 3rd Texans and the   28th Regiment, North Carolina both throwing loosing Moral scores. The Union cav now cut across to the left and slam into the fleeing 3rd.
The single Union gun fires at the advancing Confederate cavalry but misses.
The Conferate artillery continues it´s futile attacks on the 22nd USCT. 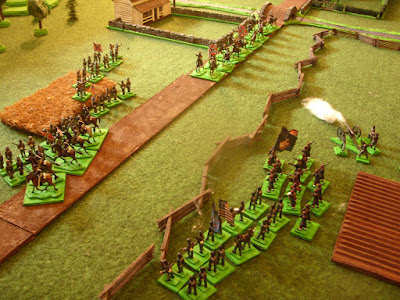 On the Union  right  "Jennison's Jayhawkers" are still advancing and the Union artillery has hitched up. The only Confederate inf still active, the 3rd Texas Infantry are undecided as to form up to oppose the Jayhawkers or the approaching 51st Pennsylvania  and 22nd USCT. With the Union artillery on the move, they settle for the luxury of hard cover and ignore the cavalry. 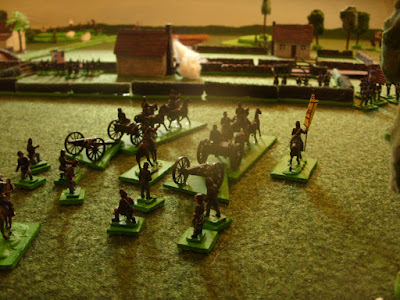 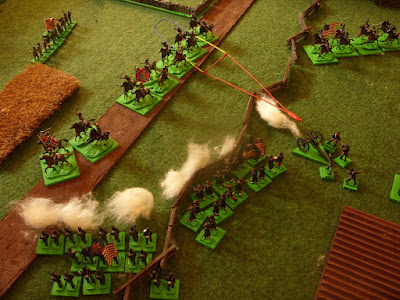 Finally, the Confederate guns have a score!!! One shot bounces into the Union artillery taking down 2 bods on a single bounce!! 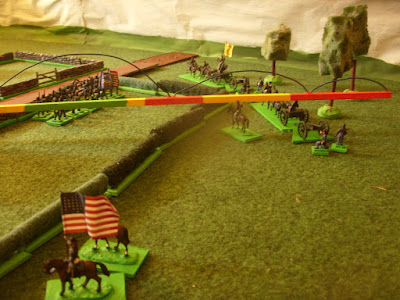 The Confederate cav run into the 7th Winsconsin, the Union Cavalry that was persuing the  3rd South Virginians has lost them into the Woods so turns to take on the Confederate cavalry. The already weakened 28th  North Carolina is just about to recieve another cavalry attack. 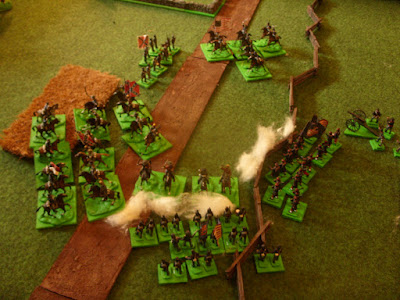 At this Point,  it ´s all Happening at once.
The fight on the road intensifies. The  7th Winsconsin loose 2 bods, the Confederate cav 1, the Union Cav loose 4, the Confederates, 2, the Union throw for Moral, loose and run for it.
The 14th new York fire into the Conferate cav but take None due to misses or saves
The 28th NC fire on the Union cav taking 2 but loose 4 on contact
The  3rd Texans and the 3rd South Virginians have again failed to Rally and leave the field. 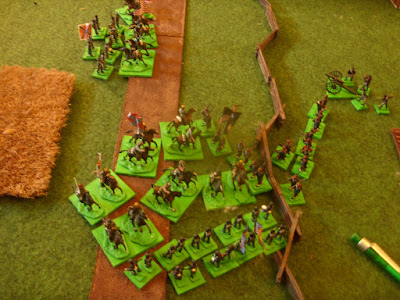 The conferate guns turn to face "Jennison's Jayhawkers" who have now rounded the hill and formed a line. One " Jayhawker" is taken, the other confederate gun yet again misses the 22nd USCT.
The "Jayhawkers" wheel into the 3rd Texas Infantry , who seeing the possibility of being surrounded have moved onto higher ground 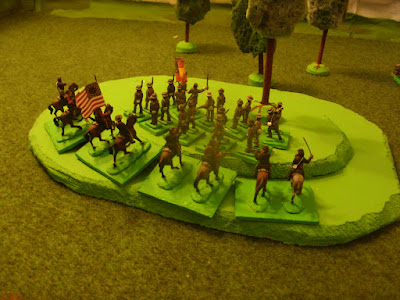 The confederate guns fire again on the 22nd USCT...and the USCT´s luck holds..misses or saves. 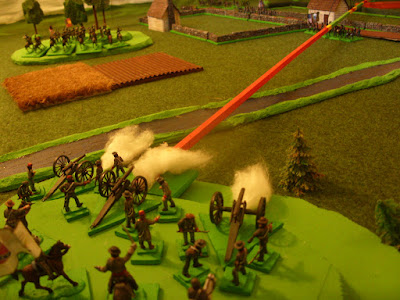 The fight on the road reaches it´s conclusion. The conferate cav, now surrounded, loose another 2 bods but take another 2 Union cav. Both throw for Moral and both run. The remaining Conderate cav takes 4 7th Winsconsin for no losses but being entirely surrounded loose the Moral throw and leave.
On the hill, the 3rd Texas Infantry get mauled, loosing 6 and  taking only one Jayhawker in return.
At this Point, with virtually all his infantry and all his cavalry either in retreat or having left the field, General S. Tore, throws in the towel...hitches up the guns and leaves.
The 3rd Texas Infantry down Tools and surrender.
John & Victoria come out of thier hiding place under the bed to find a couple of dislodged Roof tiles.

Conclusion?
The Airfix rules are a bit "stumpy" , the firing tables for a start are a bit odd, but they appear to work fair enough. I set up the field "blind"..first randomly Setting up the Terrain then putting troops as the ground allowed. When I´d finished,  I thought "the Union is going to get a kicking" but they won Hands down...possibly too well.?
Anyways, the next battle I´ll test the  rule set   "Charge Boys Charge !" by Andy Copestake with my daughter taking Charge of one of the sides.

*The funny coloured stick? " It´s my idea for an artillery measuring stick. It aint in the Airfix rules, there it´s suggested that Players "judge" the distance to the target, then measure it out...and bla bla.
I thought to add two firework rocket sticks (saved for constructing a 1/32nd scale Trebuchet) together and use that for measuring the range ..but then I thought "but cannon balls bounce" so I added the Loop bits (coloured blue..blue? sky..blue? Artistic licence? )  to represent a ball  loosing power and bouncing less and less higher and further.
Then I thought "as they bounce, sometimes they are Close to the ground, then up in the air, then Close to the ground before they bounce again etc..and as they are Close to the ground they would hit things, men horses etc"  So I marked those zones before and after Impact as,
Red for anything up to 2 cm´s tall (infantry) and ...
Yellow for 2 to 2.5cm´s tall (cavalry)
The green bits are where the ball would be too high.
At the Business end I added a movable square . This was to replace the suggested marker that would indicate wether a shot had gone off target.﻿﻿

Obviously, I never thought about the "danger zones" before adding the "hoops" and I could remove them but ...what the heck? ...and obviously the hoops are  a Basic representation, as  a cannon ball wouldn´t bounce as far in muddy ground or it would bounce further on rocky ground or it would hit a rock and alter course but ...!!!!...??! ARGH!!! Although that might be fun for someone to come up with a realistic calculus for such stuff..and then do it for 12 and whatever pounder guns...I just think, In trying to Keep within the Spirit of "old School" wargaming, I´ve already gone too far with the funny coloured stick......and had to remind myself..."it´s  just a bleedin` game!!!"
Posted by Paul´s Bods at 06:25 11 comments: