As the titel says, these are medieval travellers. 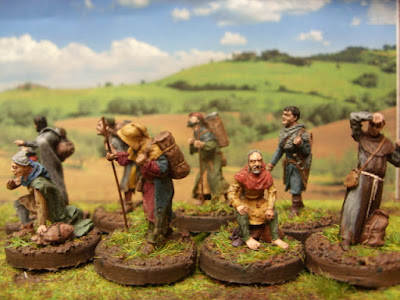 The whole set together,,,except that there´s a dog that comes with them, but he, Beisser, has been used as a companion to Klynt von Osterholz

Vladimir to the left and Estragon to the right (from the "Waiting for Godot" post) and an "overheated" priest. 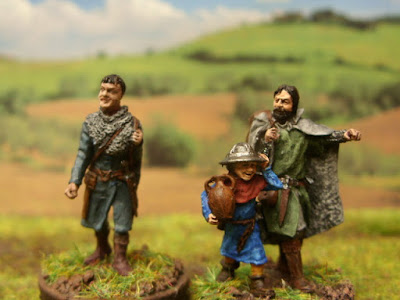 A member of the Bennos forum, Suso. The dog, beisser, is a copy of his own dog and the pair should really belong together..maybe Klynt will decide he works better alone at some point so master and hound can be re-united.
The child is an addition from the children at play set with his father

Three weighed down travellers. The one in the middle would make a  trader taking his wares to market, the one to the right is definately a mercenary type, he carries a sword, shield, helmet and crossbow. 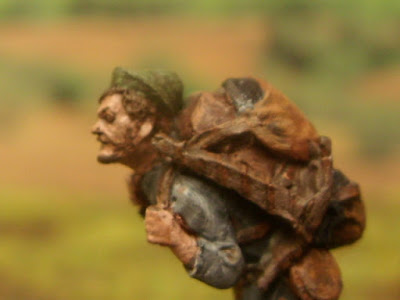 The mercenary. I`ve experimented a bit by giving him a bit of a long term not shaved look. 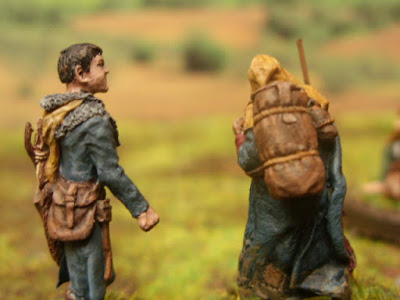 As ever with Alex´s sculpts, the detail is exemplary. Suso carries not only a bow and quiver, but some rope, two knives and an axe handel..and  details, like on the rucksack  are recreated in such perfection it makes painting these bods a joy.