This lot came more or less painted but I´ve  repainted bits and pieces and based them. 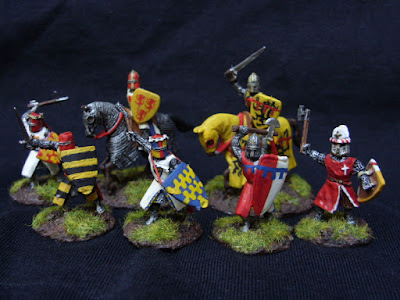 A mix of C-o-A´s, some based on reality, some, as far as my Research has led me,  made up.
The ones with a base in reality.
The three black bars on yellow? Used by quite a few places and People. The town arms of Inchy-en-Artois, Puygouzon, Beutal or the Family arms of Corbel Corbeau de Vaulserre or Kielmansegg among others but the Dates aren´t certain and some appear  after  the medieval period  or later.

The black Lion on Yellow. One of the Counts of Flanders..in this case a son due to the cadency mark, I´ll go for Robert III  Count of Flanders as he was of Fighting age during the life of his Father Guy of Dampiere . Orginally he was Holding a lance but I swopped his arm. 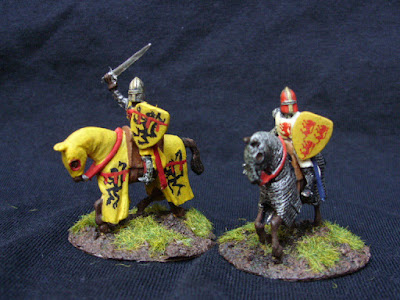 I found one or two Patterns which could fit the C-o-A of the bod in the middle, ie; John Lovel, whose C-o-A appears in the Falkirk Roll.  Barry wavy, or and gules but his has eight "waves", not six as shown and starts with yellow at the top, not red.
The one on the left of the pic is Valdemar (resin) The other 2 are metal and unknown make(s) 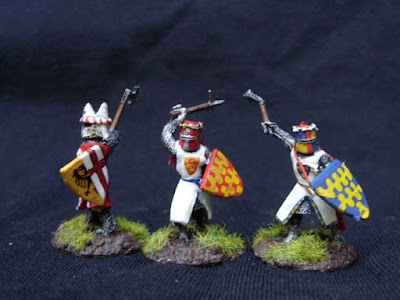