RedBox´s Alliance range, Original titel "Warg Half Orcs" but I reckon, seeing as Uruks are a half breed creature their mounts would also be Half breeds. Wargs crossed with Hyenas!! Not the modern spotted hyena but the pre-historic Cave Hyena (Crocuta crocuta Spelaea). The beast was reckoned to weigh 225 Kilos!!

Anyway, as my contribution to Orctober. 11 of the 12 have been painted as one of them was supposed to represent  Saruman but ended up as Merlin 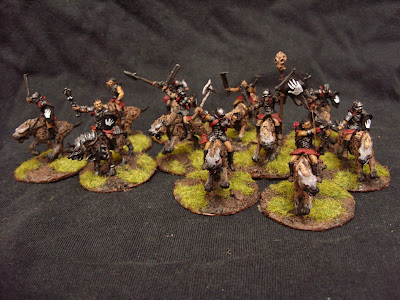 5 of the ?..what are they? Wargs not, Hyenas also not. Wyenargs? Anyway, 5 of the Wyenargs were dumped into boiling water and then had thier heads repositioned. 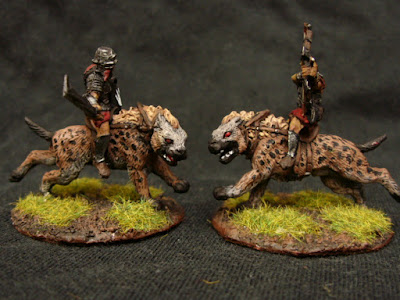 Command
It looks as if one of the  Wyenargs skulls ended up being used as part of the standard. I hope it died a peacefull death but..TBH, I doubt it. 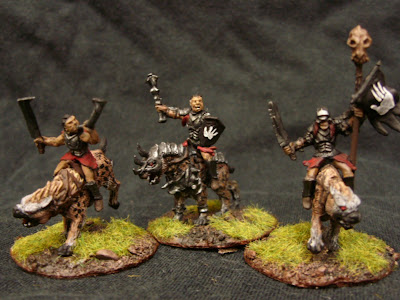 Wargs are described (By Tolkien) as being sentient and having a proto language "the dreadfull language of the wargs " which Gandalf could understand. Given that, a body of Orcs/Uruks mounted on Wargs would pose quite a problem. Being fast, they could be used to go to the flanks or rear of an enemy and when there, the orcs/Uruks could dismount to fight on foot with the wargs alongside them, effectively doubling thier force. 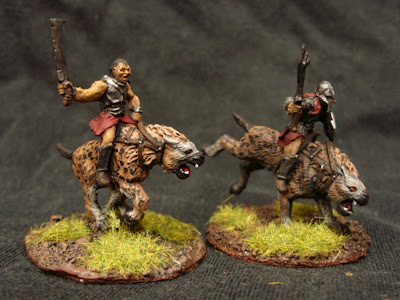