I knew I´d seen them before!!! ...as I wrote on the Medieval Gunpowder Castle Artillery post

I´ve seen examples of them in print but I can´t remember where. They look  late medieval  or Renaissance. 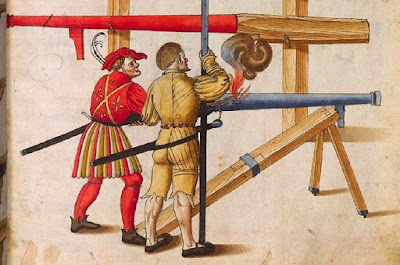 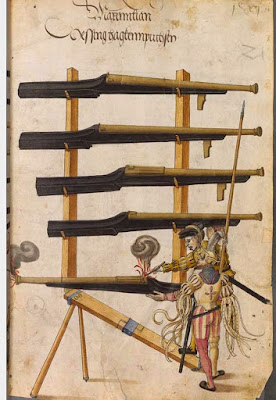 Arquebus from The German Hakenbuchse..a Hand gun with a hook so it can be braced when being fired.

And...at PSR they are sceptical about the kneeling bod using a pick axe to chip  shot down to size but..what is pictured in the bottom left Hand Corner of the pic below?

It could be RedBox were being too literal (or not)  by portraying a hammer with two spiked heads but the pic below ..the one on the right has, when viewed from the side,  what Looks like two Points. Even though they aren´t as common these days, so called  "Stone Dressing Hammers" used to be common and they do (did) look a wee bit like small pick axes. 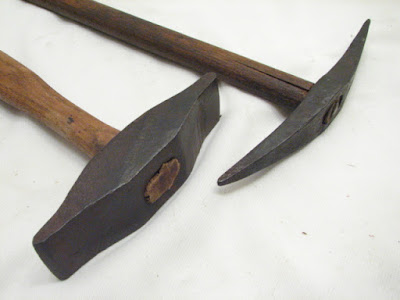 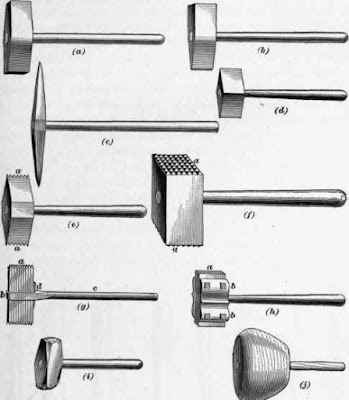 Oh...and the bod Holding the guage board..the one with the axe in his Hand. What is it for? The axe not the board.
It´s a Stone cleaving axe, something like...HERE.
IMHO, definately not a tool for shaping shot of the size that would pass through any of the holes in his board but maybe for  cutting bigger chunks of Stone into a rough size.

And just to confirm...here´s a site listing, among other Stone mason Tools,  axes (plain edged)  and Hand picks (Sculptors pick)
The Art of Making in Antiquity