You live and learn and when you do, you can, hopefully,  alter mistakes or small Errors.
She was the Standard bearer so her holding a Sword, while ok, still means the previous Version of the bodette isn´t as correct as she could be. 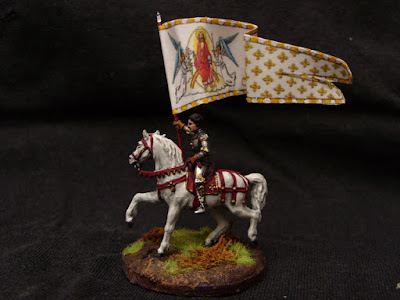 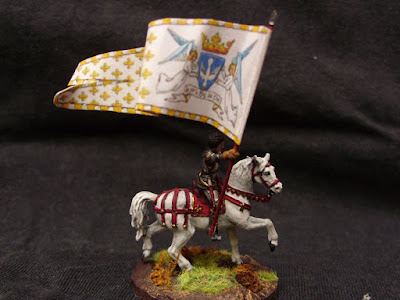 What did her banner look like?
Extract from her Trial of Condemnation, Fourth public examination, Febuary 27, 1431, at Rouen;

Question. When you were at Orleons, you had an "ensign" (Normally translated into English as Standard) What Colour was it?

Answer. I had a Standard whose field was sown with lilies. There was a figure of Christ Holding the world and on each side of him was an Angel. it was made of a White fabric called "boucassin*".
Written above, Jhesus Maria, as it seems to me, and it was fringed in silk.

*As a direct Translation ; A Course Cotton or linen Cloth stiffened with glue. Fine for bookbinding but not for a battle Standard.
In the medieval period it was called "Bokeram", "Bougran" and Boucassin"  and was used for flags, Banners,  pennons, clothing and bedding and   would just have been a fine Cotton Cloth and not stiffened.

Here´s a really good (unfortunately not updated) blog on the subject
"A Commonplace Book".