Marshall law (spot the pun?) and his crew of deputies, the Grave diggers.  These guys have to be tough to  carry out thier role of keeping law and order in Toi Town.

These are 1/72nd Hong Kong versions of the 1/32nd Scale Airfix Cowboys. A bit of fun, so they´ve been given a bit of a Hollywood style paintjob.
Why Airfix has never released them in 1/72nd scale I don´t know. "Downsizing" or "Upsizing" bods isn´t a difficult thing and they could release all thier old  sets in both 1/32nd and 1/72nd, like the
Medieval Knights , the American Indians, and the excellent Infantry support group to name a few. 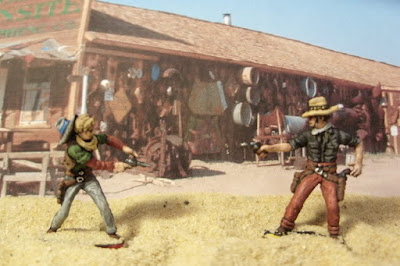