27 bods (some as Groups of two´s or three´s ) 28 if the Babe in arms is included. 7 mounted bods (one, with the woman slung across the saddle,  is a double pose) two fighting/hunting Dogs and a wild boar. 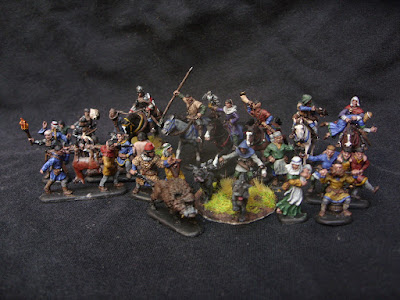 Apart from the nag Problem, it´s a great set. Very little flash and as far as I can find out, historically accurate, they´ve even got some of the bods with the classic norman soldiers haircut.
I´d have liked to see more female poses but 4  (even if one seems to be being mistreated) is a decent number compared with other sets.
The Party revellers 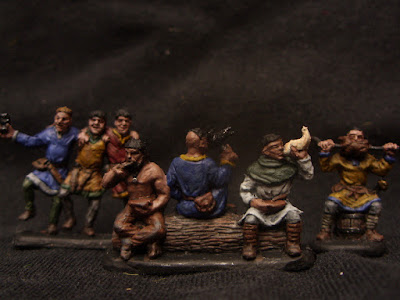 Bringing home the Bacon Doe
Soldiery
﻿﻿
The mounted poses
As mentioned, I´ve swopped the nags for others, in this case from other Strelets sets, Italeri and HäT 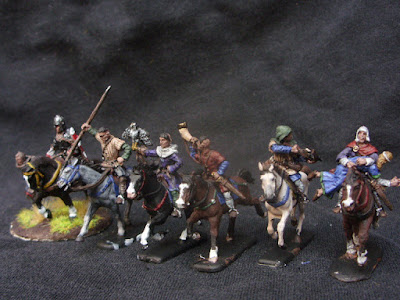 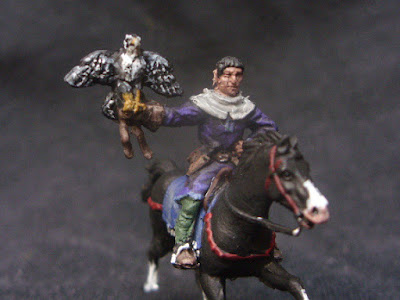 Wild boar and hunters
I removed the chunk of  pike from the boars left flank, it just didn´t look right somehow.
At PSR they mention the almost vertical angle of the crossbow but with a bit of hot water Treatment and twisting, it aligns to a slightly more realistic angle.
﻿ 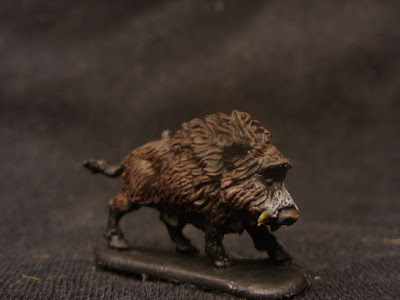 Prisoner.
Why has he got an empty scabbard and sword belt hung around his neck? I remember reading somewher that the Franks considered the sword belt with it´s buckles and scabbard as a symbol of potency and to loose it was a profound disgrace,  so maybe the hanging it around his neck is something along those lines (?)
Anyway, the rope noose Needs twisting to get it at the right angle but it fits tightly so painting the prisoners face after Fitting is a good idea..I didn´t and had to re-touch the paintjob. 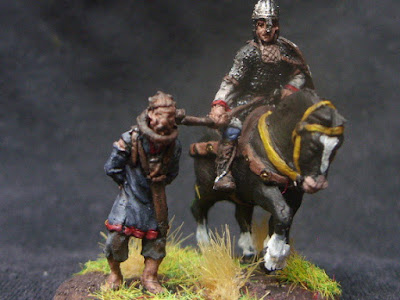 How to paint up the Dogs? Digging about and reading loads of (often contradicted) articles on what the Norman war Dogs looked like, I ended up more confused than I started.  I found  a wide range of breed names like the  Alaunt de Boucherie (Butchers Alaunt),  Molossus, Agassian, Mastin, Alano, and Lebrel.
There were a couple which had nice colour schemes like the Dogue de Bordeaux or the English Mastiff  but the  earliest record for the Dogue de Bordeaux Comes from the 14th Cent and the English Mastiff is more than likely a decendant from the Alaunt line.
Most likely is the  Alaunt de Boucherie. Seeing as it´s an extinct breed and the coat colour is disputed, one of the Alaunt types, the Alaunt Gentil, is generally White but Looks like a Greyhound..it´s  got a  dolichocephalic skull (narrow at base, long in length) as opposed to the Mastiff look which is brachycephalic (wide in base, but short in length), I went for the representation on the box art.
Dolichocephalic? Brachycephalic? I only found These words, along with mesaticephalic (it means moderate headed btw) when looking up the various dog breeds. The things you learn from painting up Little lumps of plastic !

I removed the straps from the Dogs, they didn´t really line up anyway,  and replaced them with (even if slightly out of scale) jewellry chains. 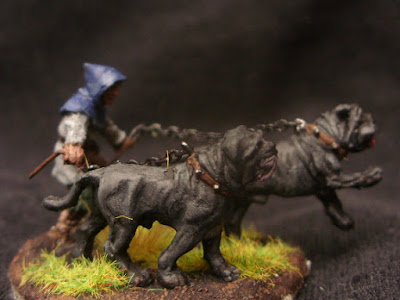 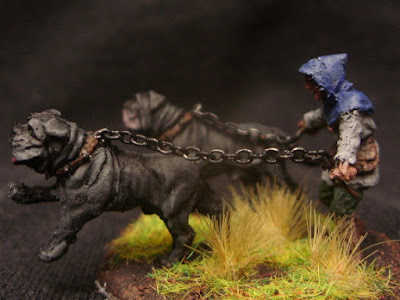 The Dogs, even for fighting Dogs, are BIG! Too big really but apart from  a couple of Fighting Dogs from various Valdemar sets or the Revell Conquistadors,  there aren´t many others..and they vary in size too much.
Pity really,  as a lot of armies, Egyptians, Greeks, Romans and conquistadores   (to Name  a few) have used fighting Dogs in their ranks. If I were Strelets (or any other manufacturer) I would make a set of fighting Dogs, Mastifs, Wolfhounds etc.
Imagine, how would a large pack of Fighting Dogs look like in a wargame ? How would they be used?
Posted by Paul´s Bods at 08:16 14 comments: