A bit of a rest from the ACW Project whilst the rest of the bits and pieces for the upcoming battles are prepared.
A Long awaited Addition to the 1/72nd medieval ranges, a complete set of archers to cover the 13th to the 15th centuries. Not Strelets  usual "chunky " Style, this lot are a lot slimmer, have a lot more Detail and  Flash is virtually non existant.
At PSR it´s noted that;
"Like the rest of the army, the English archer wore what we* could afford, scrounge, loot or otherwise choose, so a wide range of clothing styles is necessary and that is what we have here"
This was common for other armies, ie the Welsh, Scotts etc so the Titel could equally have been  "Medieval Archers".

Anyways, the Review at PSR says more than I can.. 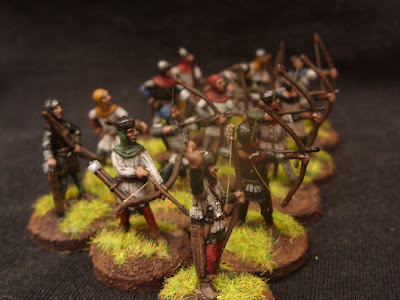 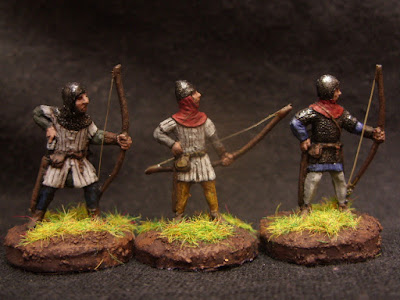 Added to the rest of the "Red Army" Archers..38 in total.
The Strelets Bods are closer in size to Airfix or Accurate / Revell than the Zvezda bods but the 4 makes mix well. 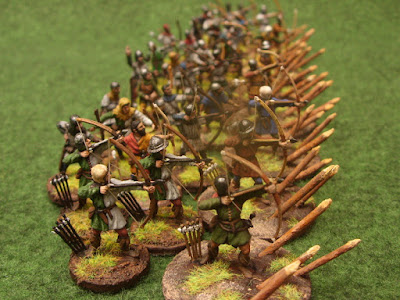 Again, like the first post on  Terrain for the project, the aim is for quick, cheap, easy and durable stuff.
Trees.

Basic, quick, easy, cheap and durable. They certainly aint going to win prizes but  I liked the lack of fuss and bother of the "Toytown" appearance. ﻿﻿﻿
﻿

﻿
I cut a  bevel (slight slope) around the bases which were then painted with cheap wall paint. Trunks added, painted Brown. Clumps of sponge (roughly shaped with scissors) are then shoved onto the bamboo rod , taken off,  a drop of PVA added  the end of the rod and the hole in the sponge and re-attached.
To get around the single colour of the sponge, I dipped my fingers into some watered down darker green  and brown paint and randomly pinched the sponge.
﻿
﻿
﻿
﻿

Way back I had loads of wall sections, the type that were used in toy farm sets and the like but they´ve Long gone to  landfill heaven. So, rather than go playing the part of Archeologist and digging up  the local  rubbish tip, I made some.
High density foam, stonework marked out with a pen, black base , Grey drybrush..the odd Stone or two picked out with different hues of Brown. 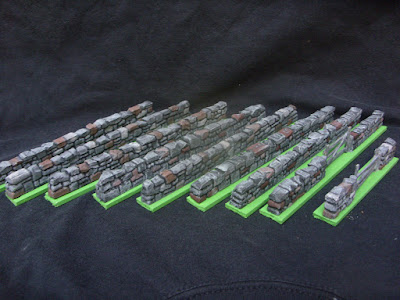 Test set up with the fences, trees, road and river sections, houses, hills, walls etc. Two Merit/New-way style decidious  trees and 1/2 a dozen firs added.
The green base is on of those astroturf style matts for Offices, the ones with the felt like surface and bobbles on the back. The surface is good because the roads etc have slightly rough undersides and stick to the felt...found this out by accident not by design.
2m x 1m. It´s not quite wide enough, everything Ends up massed in the middle,  so I´ll have to buy another. Still, it only cost a tenner. 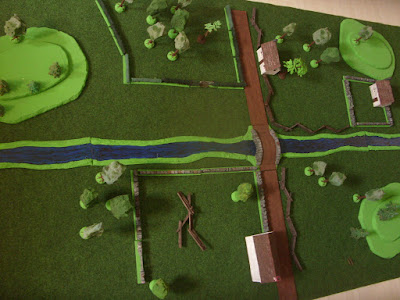 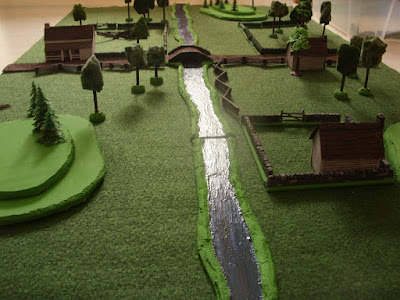 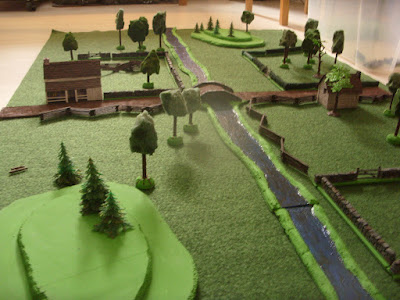 Back drops, ploughed fields and some hay fields in preperation along with some more road bits.

So, that´s about it. All that´s left is, in the words of  Sri  Sumbhajee Angria;

Email ThisBlogThis!Share to TwitterShare to FacebookShare to Pinterest
Labels: Terrain for Bods 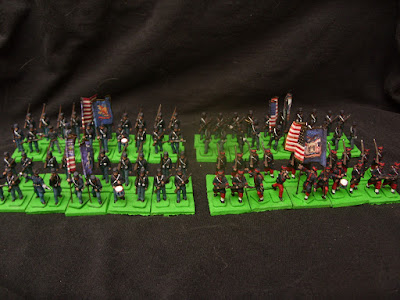 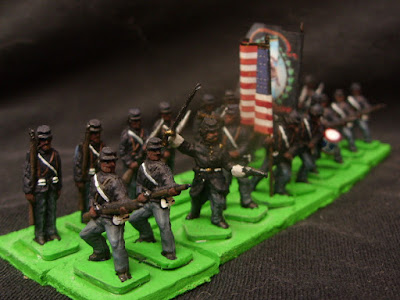 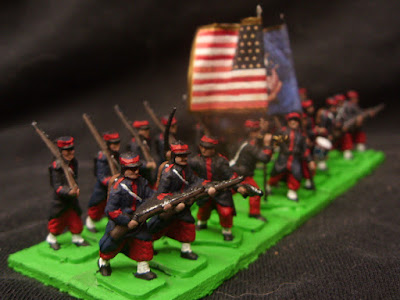 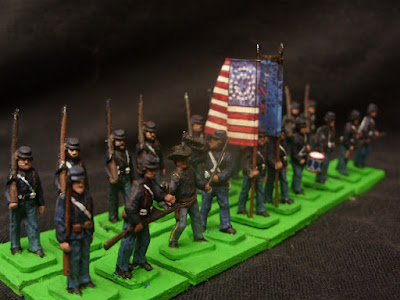 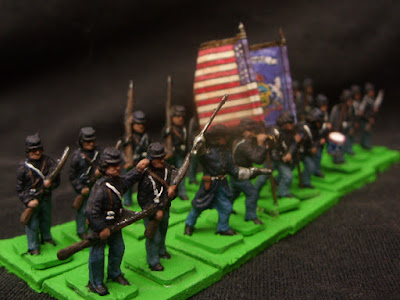 *If I can get hold of more..as and when, I´ll possibly double the number of infantry on both sides but until then, there are a lot of other Projects that Need Attention.
Posted by Paul´s Bods at 04:09 9 comments:

Conderate "Bushwackers"   to represent the 18th Virginia Cavalry and the First Virginia Partisan Rangers aka 62nd Virginia Mounted Infantry... "McNiell´s Rangers"
More or less the same bods and nags  as with "Jennison's Jayhawkers"  but this lot got a bugler and... 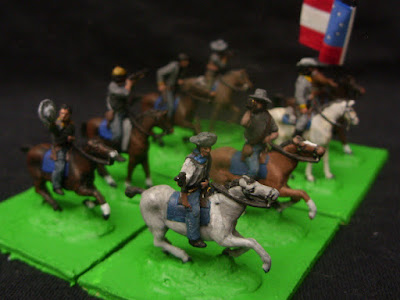 ﻿
And a couple of supply wagons. I had one already,,well, two but one´s used as part of the "Go West !!!"  dio and I haven´t the heart to break it up so again, I´m Gratefull to Mark who sent the wagon Train set along with other bits n´pieces. 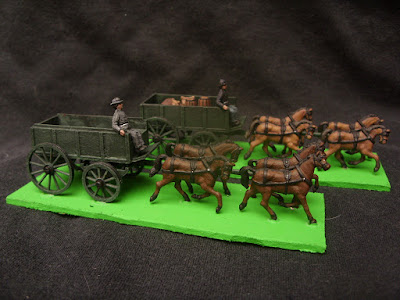 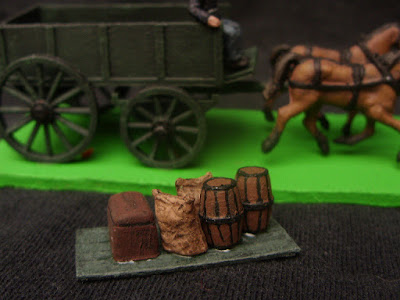 Bits and pieces of Terrain keeping to the Old School  "cheap,cheerfull, robust and quick" idea behind the Project.
The difficulty is trying to not get too involved with the Terrain.. the aim is for a more early wargames days, not quite as sparse or simplistic as just using the lawn * aka H.G.Wells Little wars but also not going for something along the lines of;
"as Close to   realistic as possible, so realistic in fact, that if I was small enough to be able to  skip merrily across this landscape, I´d hear birds tweeting and see badgers....er?...badgering"
..........and it´s all got to fit into a storage box without getting snapped, bent or crushed.

Also, the more "realistic" the longer it will take and as the target is to get this Project finished by the end of march this year,  it´ll do as it is. 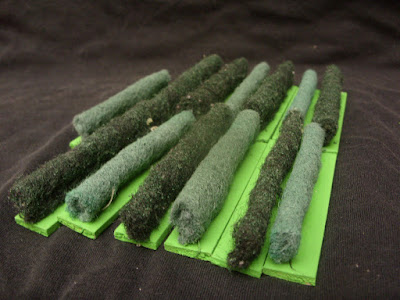 Made from......﻿
Gates.
Posts made from bits of high density foam, gates from chopped up Coffee stirrers. 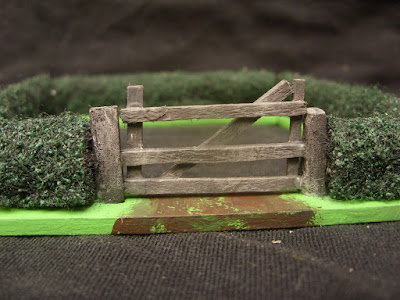 Roads.
Peasy. Strips of thin MDF board (from the back of an old cupboard) PVA smeared over the surface, sand drizzled over that and painted dark Brown then a  mid- Brown  drybrush. 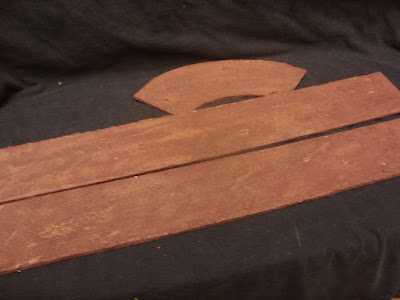 Rivers.
Again, thin MDF, Banks made with a mix of  sand/wallfiller and PVA glue . "Water" painted with first matt mid blue and then, to get a bit of a shine,  a mix of blue/green window paint with a smudge of Brown added. 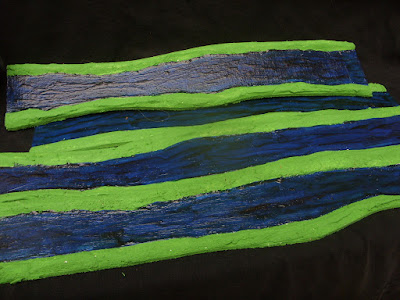 Bridge
Base the same as the roads and rivers. The sides of the Bridge high density foam and the road surface from thick Card. 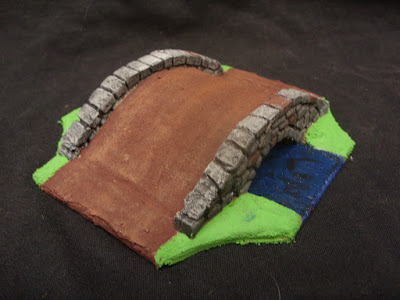 Quick test set up of the roads, Bridge and a couple of river pieces. Yep, Looks fine to me :-) So I´ll Need a couple more short sections of road and river and that´s sorted. 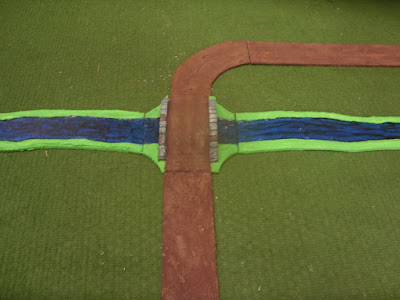 A couple of hours work and a cost of a couple of euros.

* I used to get a lot of complaints from Mater for digging earthworks in the flower beds or worse,  Setting fire to  Palisade  forts/houses made from lolly sticks and twigs  that were built in the middle of the jungle..er?..Forest..er?.. lawn.


Oh...and as I´m loosing track of which and whose Blogs I´m following, I´ve started work on sorting the blog rolls into categories;
Ones with mainly 1/72nd/20mm Content
Ones with mainly 28mm Content
And others...mixed Content, historical only, busts, 54mm etc until I get around to Setting up other blog rolls.
It´s a lot of work..more than I reckoned upon. Swopping the Blogs about means opening a couple of Windows at one time, swopping between them, adding and deleting as I go along. Deleting is the worst part. Trying to find a blog among the others on a list is a pain..you can´t put them into alphabetical order!! If your blog isn´t already under it´s blog roll heading (or in the wrong one)..don´t worry, I´ll get around to it eventually..or tell me
Posted by Paul´s Bods at 00:51 4 comments:

Email ThisBlogThis!Share to TwitterShare to FacebookShare to Pinterest
Labels: ACW, Terrain for Bods

Union "Jayhawkers" as an addition  alongside the regular cavalry.
This lot are supposed to be the  7th Regiment Kansas Volunteer Cavalry, aka "Jennison's Jayhawkers", which had William Frederick "Buffalo Bill" Cody among it´s ranks.
I couldn´t find a specific flag for the Regiment so went for a generic pennon. 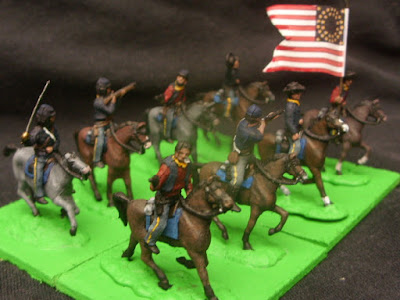 The "uniforms" they are wearing.  In an attempt to make them look a bit less like a bunch of Cowboys,  I´ve added as much  Union blue as possible and given them all  trousers with  yellow stripe. Red Shirts. I don´t know where I got that one..Hollywood film maybe?
The nags come from the Artillery set, the Cowboys set and the ones with docked tails, from the Indians set.
Posted by Paul´s Bods at 07:34 13 comments: