Brilliant devices, they came in all sizes and types with single wheels or double ones. . One 15th century one was found in 1868 in the (then) unfinished south tower of the Cathederal in Cologne.
This one is an HO/OO version in resin from the modelmakers Modellbau Luft
Direct link to the crane HERE . 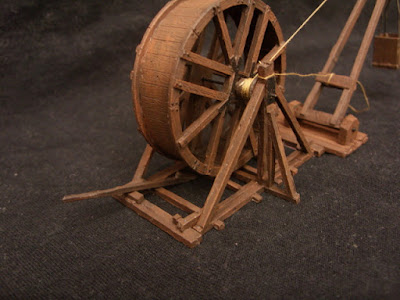 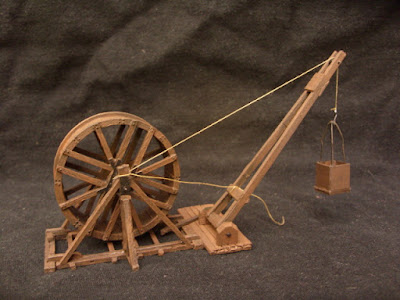 A video of a treadwheel crane being used for real at the  Guédelon Castle construction site. This one is an advanced version that turns  so the load can be moved from side to side and not just up and down. Fredericus -Rex has recently brought out a medieval crane similar to the one at Guédelon which can be seen HERE
If anyone hasn´t heard of Guédelon..then this vid is worth a look...I really hope I´m still around to see it finished.

A couple more bits of my construction....a second (or is it third?) prison wagon.... 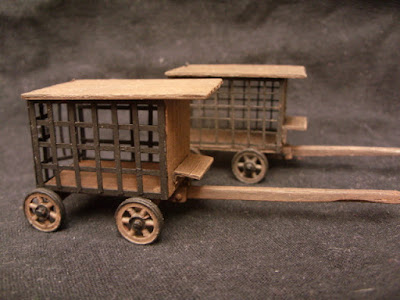 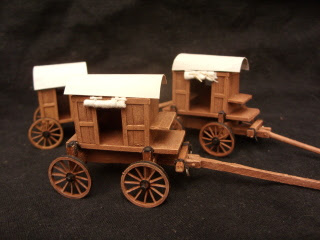 It´s Holiday season and even the bods have to have a break.
﻿ The big bods also did a bit of travelling and had a look about.
The For Freedom Museum in Belgium. On the link there´s a virtual visit to the Museum which is way better than my photos. One thing which was a bit of an eye opener was a video of some Archeologists excavating a Messerschmitt BF-110 Nightfighter ...........with a Digger!!!!!

Just up the road was another Museum, Sincfala - Museum van de Zwinstreek.
Mostly about the life and times of the locals from the medieval to present, it had some cracking wooden model boats. The ones pictured are all around 1/72nd - 28mm scale.

Bunkers!!!! The whole are is dotted with WWII bunkers, most of which you can go inside and look around. A lot of them are in a poor condition, Graffiti, used as rubbish dumps, like this Type 630 not far from the camp site,
One photo of the Type 630 at Breskens that the Bunkersite.com People didn´t get..., the turret on the top. There´s steps going down into the bunker but it was too dark to take photos.

Behind the Type 630 there was a Type 112a. As with the 630 you could go inside but had a few inches of water inside and frogs living there.
Bunkersite.com is a mine (no pun intended) of info about the bunker Systems in the area of Zeeland / Belguim. There really are masses of them.  One we visited was massive..with loads of bunkers of all different types spread over an area of two footballfields. Unfortunately we´d forgotten the camera..doh!!
﻿
Posted by Paul´s Bods at 06:19 11 comments:

A foolhardy attempt by three rogues living in the Woods to ambush and rob a Knight. 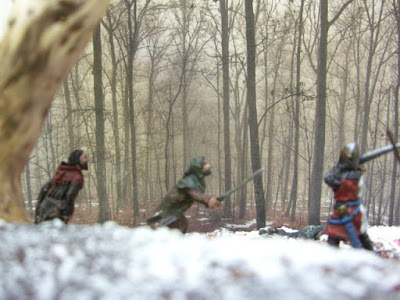 The ambush started well, a well aimed spear thrust brought the horse down, but the Knight quickly recovers 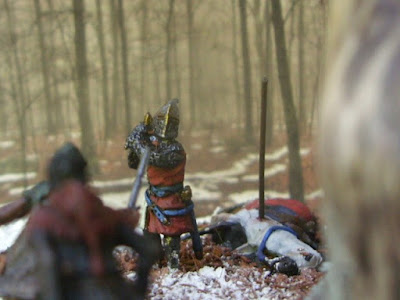 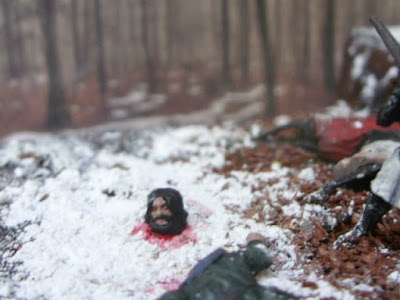 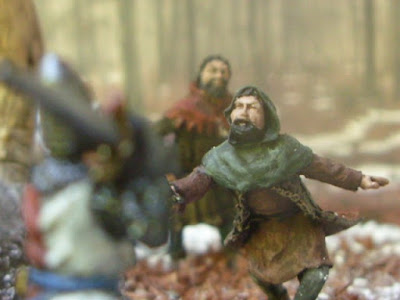 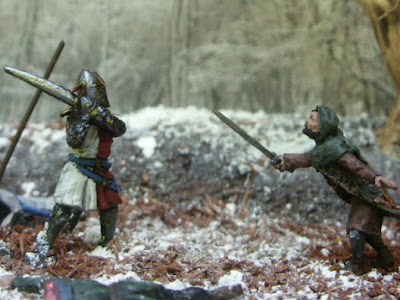 It all happened so quickly and.......Boris can´t believe his eyes. Willard is dead, and Kulp has no Chance of succeeding......stay and help or run? 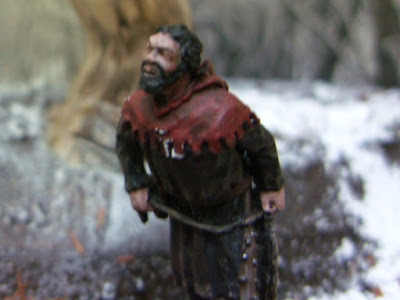 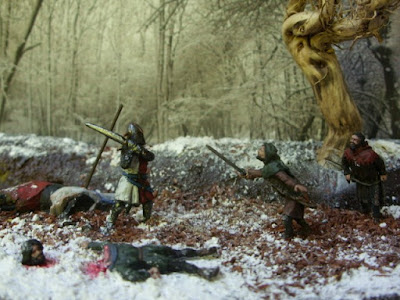 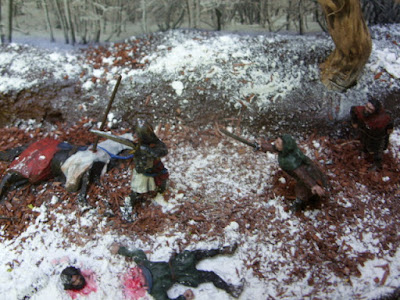 There weren´t many, most accounts reckon on about 500 archers on the scottish side, recruited from the Ettrick Forest so a Group of 10 (at the Ratio of 50:1) covers them.
Sets used;
The Scottish Army of Wallace
Army of Henry V
Norman Archers
﻿

Using the Body from the Linear-b priest in the Tudors set and the head from the airfix Robin Hood set (he Needs to have a beard) this will represent  Abbot Bernard of Arbroath.  I´ll have to make a small Version of the Breccbennach (or Monymusk Relquary), which held the relics of St Columba and Bernard carried at the battle. It´ll have to be small,  it only measures W 112mm x D 51mm x H 89mm. ﻿

Looking about on the web I´ve found an excellent site, Medieval cookery. It´s got a huge collection of recipes and  links to original medieval cookery books from all around the world, dating from the 13th century, in most cases with translations.
The oddities section is interesting..how to cook cats, hedgehogs and just in case you ever have to, advice on determining the Age of rabbits...
Posted by Paul´s Bods at 05:54 16 comments:

Or, grammatically correct, "Roma Victrix!" but Roma Victor does Sound better.
The command bods from Strelets Imperial Roman Legion 1 which suggests there will be an Imperial Roman Legion 2..
There´s a complete Review of all the sets you get in the box at PSR, a total of 168 bods and 6 nags, this lot are just the command bods, 18 foot and 6 mounted