A conversion using the bottom half of Marion from the Airfix Robin Hood set and the top half of one of the ladies from the Italeri Medieval Challenge (or the medieval Tournament) set. 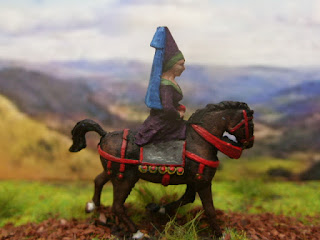 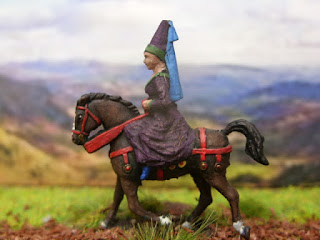 Marion is painted OOB which means she´s lacking her feet 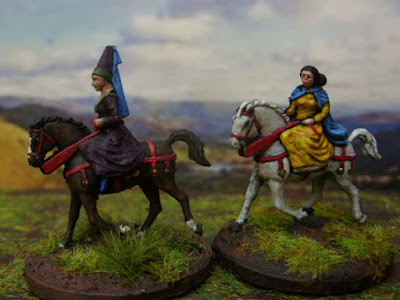 Christine looks a bit bigger than Marion, which makes the nag look comparatively small, but it was more common for  medieval women to have ridden a Palfrey  and not a Destrier.
Not that  medieval women never rode war horses, Joan of Arc (1412 - 1431) Empress Matilda (1102 - 1167)and Matilda of Boulogne (1105 - 1152) are just a handfull of famous women  among many others.

Why Christine de Pizan? I found out about her when looking for info about Joan of Arc.
Usually she´s pictured wearing a "horned" headdress (A "Butterfly Hennin",  referred to sometimes as the "Christine de Pizan headdress") but the first Picture (below) I found of her,  she wears a "Steeple Hennin" 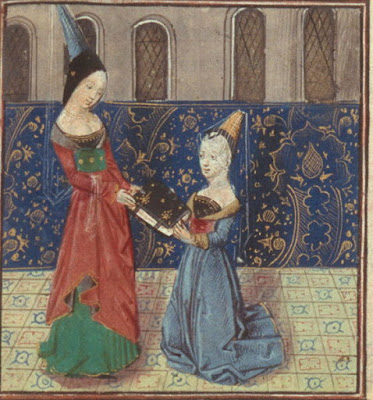 Christine de Pizan (1364 - 1430) wrote a Poem called  "Ditie de Jehanne dArc" (the Poem of Joan of Arc, also known as the song of Joan of Arc) in which she not only eulogizes Joan, but also celebrates the appearance of a woman military leader who, according to de Pizan, vindicated and rewarded all women’s efforts to defend their own sex,


"Ditie de Jehanne dArc" - Stanza XXXIV;
Hee! quel honneur au femenin Sexe!
Que Dieu l'ayme il appert,
Quant tout ce grant pueple chenin,
Par qui tout le regne ert desert,
Par femme est sours et recouvert,
Ce que Cm hommes [fait] n'eussent,
Et les traictres mis à desert!
A peine devant ne le creussent.
(Translation)
Oh! What honor for the feminine sex!
God has shown his regard for it,
in contrast to all the people who
destroyed the Kingdom and ran away and quit.
Now recovered and saved by a woman,
who did what 5000 men could not,
and now the traitors are no more
who would have believed this before
For those interested, there´s a very nice Illustrated PDF Version (in original and Translation in english, HERE
Posted by Paul´s Bods at 03:42 10 comments: