If you can´t buy it..re-create it. There is, only one  Female side saddle riding bod,   who could possible be converted to make one that fits to the  18th century and that is the Maid Marion from the Airfix Robin Hood set.
Rather than buy a complete set, I found her in a pick n´Mix bin at the Heiden exhibition. Not the best cast either. The horse was missing half  the rear left leg and  there was lots of Flash.
The decoration on the horse had to be removed, the thickness of the reins reduced, Marion´s feet needed adding (missing in the original ) head replaced and hair remodelled.
It was a test..which although has worked to an acceptable standard, I´m not 100% pleased with it, so I will get another Marion and repeat the whole process using a better looking  head.
She will become Hanna Turset in the land of Bodstonia. 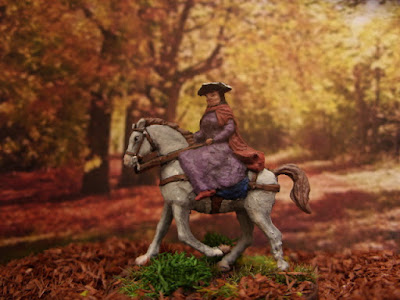 Hanna on a Woodland ride. Head swop using one from the Airfix Washingtons Army set 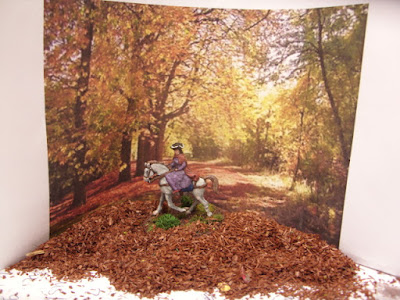