Probably another of those "I already know that" things but maybe..just maybe, it might be helpfull.
I like to make my spears out of metal for two reasons. It takes paint better than broom bristles and if there is no ring hand (or I can´t create one) they can be heated over a candle and "welded" to the bod. It has a disadvantge in that it´s heavy but as my bods all get based, one way or another it doesn´t bother me.

Firstly the tools. From right to left. Pliers (I forgot to add them in the pic)  fine metal file, hammer, an old pair of scissors, 0.8 florist wire, and a hard surface. I´m lucky cos I´ve got this little anvil..(I pinched it from my son...well..he pinched 2 of the robots I got the other day ...so fair´s fair). 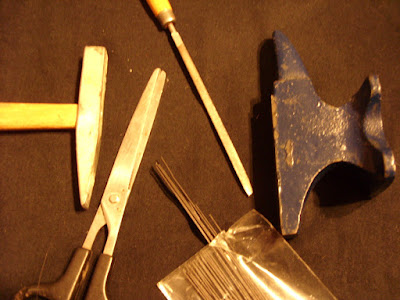 Cut of a length of florists wire..a bit longer than the length the spear will end up. Bash the tip flat, ocassionally turning the wire over so that the "spearhead" will end up more or less central to the shaft. 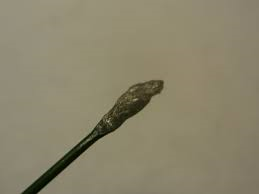 Snip the basic shape of the spearhead. A pair of old scissors  work fine as the metal should be quite thin after it´s beating.

Grip the spear with the pliers as close to the head as possible. If you just hold it in your hands the shaft tends to get bent. Firstly file both flat sides of the head, then round the corners to the edges. I like to file the back of the spear head (the part next to the shaft) to to give the appearanve of it being in two parts, head and shaft. Cut the spearshaft to the desired length..finished :-D 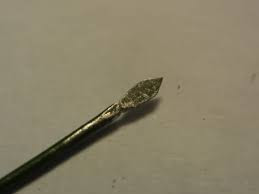 Note. These Things are sharp when finished so be carefull
Posted by Paul´s Bods at 08:06 18 comments: