No Bodettes with "big fronts"  here. They are wearing protective clothing,  mainly chainmail,  so the female form would be "suppressed" to a greater degree than protrayed in most "historical" portrayals such as the Vikings series.
Ok, they may well have worn helmets* but to show they are females and not just any Viking bod re-classified as a Shield maiden,  I´ve left  them helmetless.
Heads from the Alliance  Amazons set and bodies from the Zvezda Vikings set. 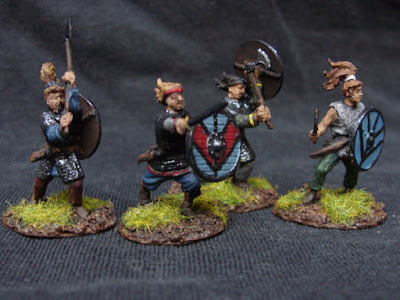 The Shield pattern is shown on the shields carried by Lagertha and her  Shield maidens in the Vikings series, which I´ve used here.   It looks like it´s loosely based on the  Algiz (Elhaz) rune.
Lagertha´s Shield has the design shown later in the series, two areas coloured in red.

*Ok,  Birka, wasn´t buried with a helmet, probably why she ended up with a big cut on her forehead, but it doesn´t mean other Shield maidens didn´t wear them.
Were there Shield maidens?   IMHO, yes.
Posted by Paul´s Bods at 08:56 5 comments: