Another 30 Croburn 1813 volunteers done and dusted.

I know, I said napoleonics aren´t really my thing but.....
The first batch of 30 from 120 Napoleonic Austrian Pioneers for the Cröburn 1813 Diorama. or "what it´s possible to  speed paint in one day" :-D
They will all form a group along with a set of wagons, which I´ve already painted here.
Hello to Don from Old soldiers never Die..they just trade away Blog  a swop or Buying blog for 20mm bods. He also has another blog, ID Network Pics, a usefull bod recognition service
Posted by Paul´s Bods at 05:00 20 comments:

Part of the NNC (Native Natal Contingent) the NNH was formed from tribes that were hostile to the Zulus and fought bravely during the Anglo - Zulu war of 1879.  At  the Battle of Isandlwana, they are credited with stopping   to give rides to both native and British soldiers.
One the whole, the NNC had a bit of a mixed battle record, for instance the contingent of NNC ran away at Rorkes drift. Their corporal, Christian Ferdinand Schiess remained.
The NNC infantry were only equiped with one rifle in ten and were usually used for menial labour, The NNH were better equipped. Tan-coloured European style uniforms, a horse with full equipment, (although I have read that they were expected to supply thier own horse,,but that seems unlikely) and each trooper was issued with a carbine in addition to their traditional African spears. Units of the NNH were led by European officers dressed in  sky-blue uniforms.
The NNC was finally disbanded during the second Anglo - Boer war due to fears of them siding with the boers.
The whole Colonial army so far. Now all I have to do is wait for the Wagons, the Zulu war british infantry, Natal Native Contingent (the infantry), Colonial Bengal Lancers

They had a uniform but apparently they preffered to use civilian clobber, even on active service, the only recognisable thing showing that they belonged to the Light horse being a red band tied around thier hats. I´ve gone for a uniformed look, using the colours suggested on the HaT boxart.
﻿﻿﻿

These are as near enough to painting napoleonics as I want to get...the belts etc..it near drove me mad. Enorm respect to those of you whose main interest is napoleonics...I wouldn´t have the patience.
I´ve mixed a bit of the box art with pics I found on the web...the cuffs for example. On the box art they have a white line around the white cuff, but most pics on the web show just a white cuff. The bag at the front. To try and get a cross over in colour between horse and rider I painted them brown..they should be blue but it ended up looking a bit too much.
The plastron fronted tunic, although the plastron was turned back to hide the white panel I liked the look of it.
As they are for my Khandibarian colonials, they will be rebranded the "Queens III Lancers" (Painting 17L on the bedding roll,  proved beyond me) it´s not really necessary to go the whole "historical mile".
I would have liked a horse in full gallop but apart from a bit of extra plastic between the rear legs of one or two of the horses,  it´s a very nice set.
Posted by Paul´s Bods at 05:39 19 comments:

The same horse poses as with the Andalusian Heavy cavalry but a bit smaller to imply more of a light cavalry type of horse.  More or less the same "small" problems as with the Heavy cavalry set, but this time I´ve overcome the problem of attaching the riders to the saddles. I cut off the top 1/3 of a pin. Using a pair of pliers, I stuck it about halfway in,  blunt side down into the middle of the saddle ..and pushed the rider onto the sharp bit ...

Hello to Jesse from Military History in Miniature Blog. Just started in the blogging world but has been painting bods etc for a while..his "Homage to George Orwell" dio is excellent.
Posted by Paul´s Bods at 06:52 9 comments:

Not a bad set but not one of the best. For a start the horses are too thin and the riders legs are spread too wide, meaning they don´t sit properly in the saddle. A couple of the horse poses have a lot of extra plastic between the back legs meaning a bit of knifework.
The riders legs are leaning a bit to the short side.., the one with the lance, his legs look way too short.
Stil..a usefull set for building a Moorish army

A new set just released by Tom Winterkamp and only available from Toy´s & More and I´ve  had the pleasure of painting them. There doesn´t seem to be much info on these specialists so if I´ve got the colours wrong..the blue too dark or whatever then it´s not my fault...(Or I can blame the photos)
I found no pics / colourplates on the web but  a colour guide;
helmet,cuirass--steel
pants--sea blue
shirt sleeves--sea blue OR  gray
pouch,collar,boots-- black
collar trim--red  ( the only pic I found had the sleeves trim in red as well)
belt buckle - lantern--brass
logs--brown,
barrel, tool handles,straw--wood
sledge hammer,axe,hoe,shovel,pick axe,saw--steel
Ties,belt--leather
The set has a stockier look than the bods from  Strelets , but I reckon they could be easily mixed with each other.

Petraria Arcatinus  roughly translated means  Bow - powered Rock - thrower
There is little  historical evidence for its existence but various drawings from the medieval period do show bow powered siege engines and such a weapon would be a pretty obvious step in weapon design, combining a crossbow with a  torsion powered throwing arm type of catapult.. There is mention of King Louis of France having a Petraria nicknamed "Malvoisin" ( bad neighbour ) at the siege of Acre 1189 - 1191 but what it´s actual design was ?
This model was scratch built by Tommy and Tina, the builders of the Medieval Castle.
﻿

In an attempt to learn a bit more, overcome any design faults etc  before I try to build a small scale working version ( and have a bit of fun) I´ve built a large scale working trebuchet.
I´ve learnt a couple of things. The counter weight. It needs to be quite heavy...my first attempt I filled it with stones like they would have, but it threw very slowly, so I re-filled it with lead. I could also have moved the counterweight further away from the fulcrum point, but as there is only a couple of cm´s between underside and the running board, especially when the counterweight swings back and forwards after firing,  this was impossible. The only solution to increase the distance of the counterweight along the arm would be to increase the height of the middle section..which is now too late.
Also..the range can be altered by lengthening or shortening the strings to the sling as does slightly altering the angle of the pin that the loose line is attached to. Bend it a slight bit more away from the direction of throw and it increases the release time..which alters the flight..making it flatter, less of a high arc.
Set up as it is at the moment,  it throws a 4-5 cm´ds wide stone 20-25 meters.
Not far considering it´s size, but this is due to the positioning of the fulcrum and the weight of the counterweight, 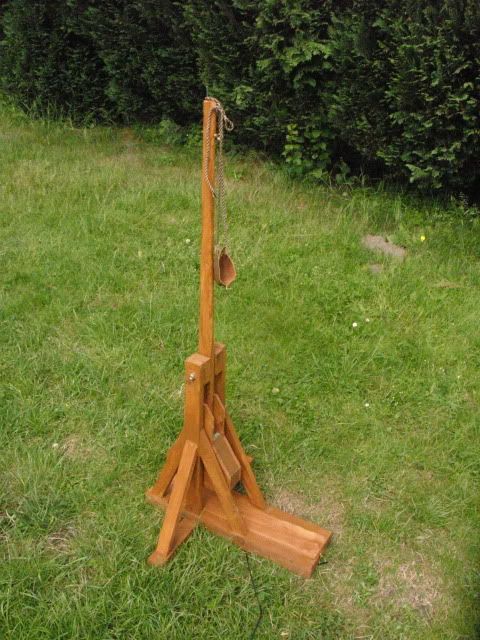 No claims to historical accuracy....it´s missing a lot of supports and the actual body length is way to short at the front. I also left any winding gear off..it just seemed (at the moment) impracticle. 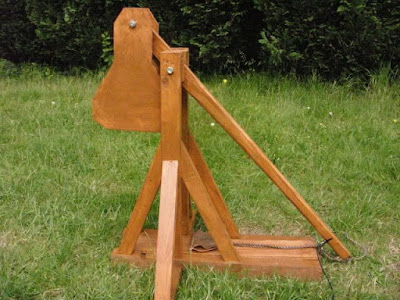 The axles for the arm and the counter weight proved difficult. I used metal tubes inserted into the arm, then other slightly longer thinner tubes held in place with washers were pushed through them. The bolts were then inserted. This made sure that no wood was touching moving metal and decreased the friction, which would have slowed the firing action down. 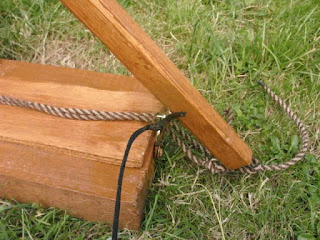 The trigger. I added this type of trigger, one using a pull cord after the one that was more historcally accurate, a pin that was knocked out, got me a whack on the ear from the arm releasing.

A couple of mini videos showing it in action

Hello to Marzio from Fog´s Soldiers. blog. In his own words " Fog' s Soldiers is a professional miniature painting service and a producer of high quality, handcrafted, scenery and model trains services."
Hello to Punkreaper from G+
Hello to Ralph Ashdown..I´ve seen your name mentioned on sean´s Blog..but no link from here?

Mike Whitaker has Just given a link to a site that works out the statistics of a trebuchet for you....
Virtual Trebuchet    Excellent..just what I was looking for. :-D