Recently a question turned up...someone was looking for 20mm dead nags. There are a few sets with one or two dead nags in them and Ykreol make sets, covering all eras  of dead and dying bods and nags but it´s easy enough to create dead nags using spares.

First select the nag...a running one is better than a stationary or Walking pose. Remove the base.
I´m also going to add a couple of dead bods.

Slice off the bumps (rump and shoulder) on the underside (the side it will end up lying on) of the nag.

This enables it to lay flat. You could make some thick basing and press it into that but I´ve found the head and neck end up "unaturally" embedded in the surface, almost as if the horse was made of lead and fell onto some sandy earth.

Put into boiling water for a minute or two to soften   the plastic before twisting and turning the legs and arms etc. The new Position has to be Held until the plastic cools. If it isn´t,  the old Position (or very near to it) will be taken up again. The reason? Plastic has a "Memory" Heating plastic up makes it maleable but the "Memory" isn´t taken away. Parts altered by heating up the plastic can be returned to their original (or very near) simply by putting the bod into hot water again.

The raised hand of the Knight was holding a sword but this has been removed and a glove effect made by squeezing the empty hand  with fine toothed pliers. One Thing...don´t Forget to add a stirrup to the "topside" of the  fallen nag.

They now get painted. The base gets a thin smear of woodglue/fine sand mix and the bods and nags get pressed onto the mix. Any small gaps between the nag/bods and the "ground" can be filled with small amounts of PVA-Sand mix or camouflaged with static grass. Let dry,  paint and decorate.

Introducing Marga and Morgu, the two winners of "most lovely orcette of the year" 1067 and 1068 respectively. Marga´s Body is from the Linear -b Roman Port set and Morgu´s from the Roman Tavern set. Heads from Caeser´s Orc Warriors set. 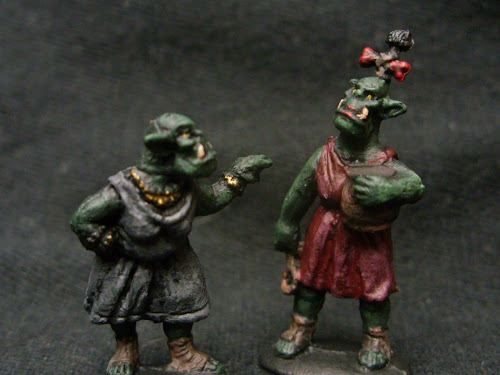 So I told him I did 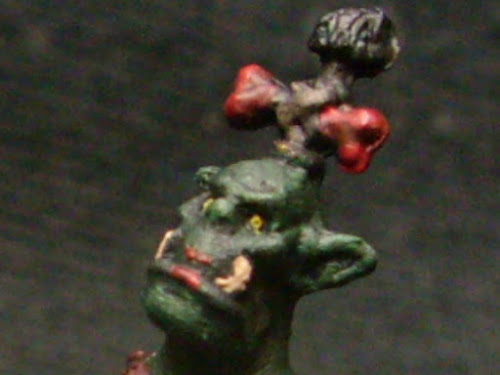 No..HE´S Spartacus!!
Top half from the Linear-b Spartacus uprising set, his legs donated from the "my Barrel!" bod below. The nag is from one of the Roman strelets cavalry sets.

and a couple of other conversions......

This couple are from the Linear-b Roman market set. The woman and her child always looked lonely so the potter has stopped selling pots for a while to proudly present his new child
.
Posted by Paul´s Bods at 04:20 19 comments: