This should have been posted yesterday but due to the "Friday the 13th" crash it wasn´t.
Anyway all seems ok now..:-D
Staff  or stave slings...fustibalus
There arent that many slingers as far as medieval models go, as far as I know there´s only one in 1/72nd scale, a bod from the Zvezda medieval peasant army  set and he´s a Hand slinger using a so called "shepards sling".
After a bit of research I know that there are NO medieval staff slingers represented in 1/72nd or any other scale come to that, although this seems to have been quite a common and effective weapon, with a massive range and deadly effect. 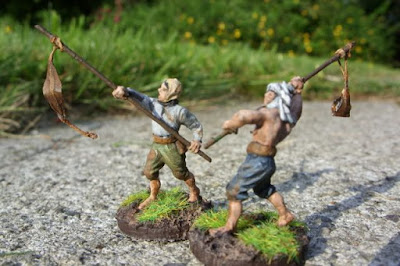 The bods are from the zvezda peasant set. I used them because  they were going spare and the poses offered the best opportunity without masses of conversion.
They are using the "field" staff sling, with 5 - 6 foot long poles. (1.7 - 2m) 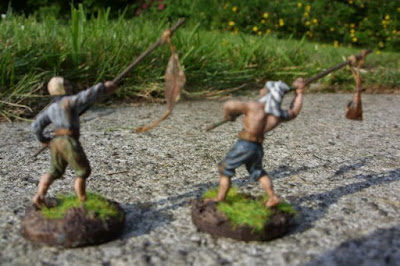