A Nexus Apache Camp Totem pole, found in the bits box at the BB Toys 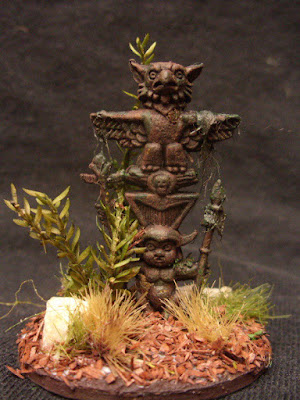 This will end up as an abandoned totem pole  in the Bodstonian landscape, where, if anyones taking note, there´s no  religious aspect to the lifes and loves of the inhabitants, Bodstonian or native and it can be used in one of the six ways they were originally intended for;
House frontal poles,
Interior house posts,
Mortuary poles,
Memorial poles,
Welcome poles,
Ridicule or shame poles.

Luckily for my Bodstonian adventures, Totem poles have no religious meaning,and where not worshipped;

Totem poles are not religious objects, but they do communicate important aspects of native culture. Carvings of animals and other characters typically represent characters or events in a story. The carvings may symbolize or commemorate cultural beliefs that recount familiar legends, clan lineages, or notable events. The poles may also serve as functional architectural features, welcome signs for village visitors, mortuary vessels for the remains of deceased ancestors, or as a means to publicly ridicule someone.

Anyway, two of Bodstonias personalities, James Forrester and Adahy come across the abandoned Totempole in THIS Episode from the Federation of Bodstonia
Posted by Paul´s Bods at 12:04 4 comments: